In a Notice of Intent to Sue delivered to Ameren on Wednesday afternoon, the Sierra Club alleges the company's Labadie, Meramec, and Rush Island plants have exceeded air pollution limits almost 10,000 times since 2008. 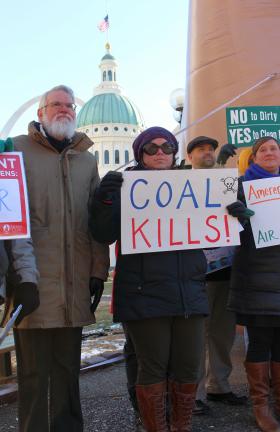 The alleged violations involve "opacity," a measure of fine particulate matter, or soot, being emitted by the coal-fired plants in the smoke from their smokestacks. Every six minutes that visible emissions exceed state air standards counts as another violation.

Speaking at a rally on Thursday in Keiner Plaza, Sierra Club’s Andy Knott said Ameren needs to do whatever it takes to bring its coal-fired power plants into compliance ― from adding pollution controls, to shutting the plants down.

“You know, these plants are outdated, they’re very old," Knott said. "The Meramec plant is 60 years old. I mean these are the dinosaurs of the energy sector. And all around us, other states are investing more and more in clean energy, and that’s what Ameren needs to do as well.”

As required by the federal Clean Air Act, the Sierra Club is giving Ameren 60-days notice of its plan to file a civil lawsuit. The group says it is willing to discuss matters with the company during that period, in the hope of obtaining an "early and prompt resolution of these allegations."

He says his eleven-year-old son Joey has always loved playing sports, from cross-country to baseball.

“We started to get concerned during soccer season a couple years ago," Frank said. "It seemed odd to us that he was wheezing, and breathing the way that he was, because it’s not something that’s typical in our family.”

If inhaled, fine particulate matter ― like the kind in power plant smoke ― can get deep into the lungs. According to the U.S. Environmental Protection Agency, it can cause serious health problems, including aggravated asthma and premature death. Children, older adults, and people with heart or lung diseases are most at risk.

In response to our request for comment, Ameren's Vice President of Environmental Services, Michael Menne, provided the following statement:

"Ameren Missouri has at all times operated our energy centers in accordance with EPA regulations and permitting requirements. Contrary to the assertions by the Sierra Club, unauthorized opacity exceedances occur infrequently and existing pollution control equipment removes approximately 99 percent of particulates from the flue gas stream. We report all of our emissions as required to EPA, and the agency has not cited our Missouri coal-fired energy centers for opacity or permit violations. The filing of such litigation is a common tactic used by opponents who are striving to remove coal from energy choices available to customers."

The Sierra Club and Labadie Environmental Organization submitted a letter to the Missouri Department of Natural Resources on Thursday asking the state not to allow Ameren to build new coal ash landfills before testing groundwater for contamination.

Ameren’s coal-fired power plant in Labadie is among the top ten greenhouse gas emitters in the country. That’s according to data released today [on Wednesday] by the U.S. Environmental Protection Agency. Véronique LaCapra reports, from St. Louis.

'Several Days' Before Callaway Nuclear Reactor Will Be Back Online

Missouri's lone nuclear reactor remains shut down while workers and officials continue to investigate what caused a small fire at the Callaway County plant Friday night.

Ameren Missouri spokesman Cleve Reasoner said it'll be several days before the plant is back online.

An environmental group says it plans to soon sue utility provider Ameren over what it calls repeated violations of federal air pollution standards.

The Sierra Club told Ameren Corp. it plans legal action in the next 60 days over what the group says are nearly 10,000 violations of the Clean Air Act since 2008 at coal-fired power plants in St. Louis, Jefferson and Franklin counties

The alleged violations involve the amount of soot released from smokestacks at the Meramec, Labadie and Rush Island plants.

Thanks to tight competition, hog farmers are feeling a push to expand or get out of the business. That means indoor confined animal feeding operations, or CAFOs, are growing, even in the most environmentally sensitive areas.

The hog industry’s impact on the water supply is worrying many residents of northeast Iowa’s Winneshiek County, near Decorah.