It’s a direct challenge, Martin said, that may be less jarring today than it would have been even a few years ago — especially since gay marriage bans are being struck down or overturned around the country.

What’s happening in Missouri, Martin said, “simply echoes what we see across the entire country.”

The greater visibility of gays and lesbians has led, he said, to greater acceptance.

“So many people have friends and family who are LGBT who are more comfortable talking about it now,” Martin said. “They recognize that these folks are just like me. [They say,] ‘If I can enjoy the trials and tribulations of marriage, why shouldn’t my son or daughter or my brother or sister or my friend or neighbor be able to do so as well?’ It really makes no sense to deny marriage equality to somebody based on who they love.”

Gray chimed in: “Why would anybody want to deny anybody of this experience who love each other, right?” 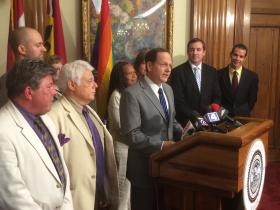 Aug. 3 is the 10-year anniversary of the passage of the state’s constitutional ban on gay marriage. It received over 70 percent of the vote and, as a result, made it impossible for the General Assembly to legalize same-sex marriage. Only a court order or another vote could overturn the amendment.

One of the few major political figures who opposed the 2004 amendment was St. Louis Mayor Francis Slay.

John Durnell and Richard Eaton were the first to receive a marriage license last Wednesday. They echoed Slay’s sentiments. 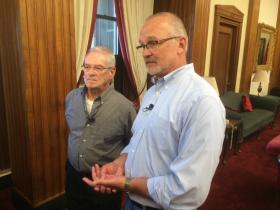 Ten years ago, Eaton said, St. Louis’ Pride Festival was much smaller. People, he said, would try not to get in front of television cameras “because it was risky.”

“You will see thousands of people downtown at the parade,” Eaton said. “Ten years ago, you wouldn’t have seen that.”

“I see our state changing because the younger generation really doesn’t find this as an issue,” Durnell said. “Ten years is a big difference of how our state thought and how it thinks now. I see quickly a time when this is no longer newsworthy. It’s just going to be the norm."

Senate Minority Leader Jolie Justus — Missouri's first openly gay senator — told this reporter in late 2012 that her presence in the General Assembly softened some of her fellow legislators' anti-gay rhetoric. 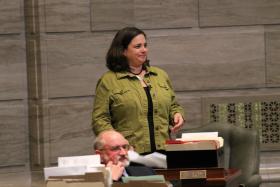 In May, she predicted it was only a matter of time before Missouri extended anti-discrimination protections to gays and lesbians. Whether that means the state is ready to embrace gay marriage too, she said, remains to be seen.

“Because of the overwhelming number of individuals who have come out over the last decade, you see folks who can no longer come up with a justification for why they shouldn’t provide basic protections in the workplace,” Justus said. “And frankly, I don’t think Missouri’s much farther behind on the marriage issue either. If it came to a vote today, I don’t know if it would win. But I know it wouldn’t lose at the same levels that it lost in 2004.”

During an appearance on the Politically Speaking podcast, Republican political consultant James Harris noted that he’d recently polled the issue of gay marriage. 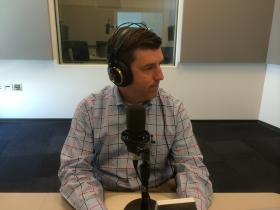 “Fundamentally, the majority of Missouri voters still believes in the constitutional amendment,” Harris said. “Just like nationally, younger people 35 or younger have a different outlook, (but) people 60-plus are much more supportive of the amendment. And it’s an issue that is changing. We’re seeing it around the country.”

Harris questioned whether a court challenge was the proper way to try to alter a voter-approved measure. House Speaker Tim Jones, R-Eureka, made a similar argument in a statement he released last week.

“It’s not the right recourse for activists to go to the courts and force them to make these decisions,” Harris said. “The proper course is to put new ballot measures before the voters and either have them decide them or have, as some states have, legislatures and governors come together and enact new legislation to allow that.”

But Jeff Rainford, chief of staff to Slay, said this fight is different.

“We all learned this in the 8th grade: The majority doesn’t rule when the majority is imposing unconstitutional limits on the civil rights of the minority,” Rainford said. “It used to be that Missouri banned interracial marriage. I think we’d all agree today that even if a majority of people wanted that, we should not tolerate it.”

'The way things are'

Martin perhaps has had a better view than most of how the politics of gay marriage have changed.

Martin has been deputy chief of staff for U.S. Sen. Claire McCaskill since 2007. And while McCaskill joined Slay in opposing the 2004 amendment, she didn’t express support for gay marriage until 2013.

With gay marriage bans being challenged -- and defeated -- across the country, Martin said it's only a matter of time before what he and Gray did become commonplace everywhere.

“I think you already see what we did here today, maybe it makes a little bit of a blip on the national radar. But it doesn’t make the same kind of impact that it would have made a year or two years ago,” Martin said. “I’m hopeful in five or 10 years, nobody’s going to know any of us who participated in this — that we were here for this.

“It’s going to be the way things are, that two people who love each other are allowed to get married to each other — regardless of who it is that they love,” he added.

Only a day after Michael Sam’s announcement that he is gay, the wheels were already turning in the state capitol.

Our neighbors in St. Louis and Kansas City are two of 25 cities in the U.S. to get a perfect score on the 2013 Municipal Equality Index, or MEI. Columbia and Jefferson City fell further down the list. The MEI is conducted by a national organization working for lesbian, gay, bisexual and transgender equality. The study looks at equality issues including nondiscrimination policies in cities and states.

Last week, it was hard to miss the huge news coming out of Columbia.

Former University of Missouri defensive lineman Michael Sam came out to ESPN last week. He could be the first openly gay NFL player after the draft in May.

"I'm not afraid to tell the world who I am. I'm Michael Sam: I'm a college graduate. I'm African American, and I'm gay," Sam said. "I'm comfortable in my skin."

Koster backs gay marriage but fights it in court

Missouri Attorney General Chris Koster says he personally supports gay marriage but will defend the state's constitutional ban against it.

A Missouri House Democrat has introduced legislation that would repeal the state's ban on gay marriage.

Mike Colona, a House member from St. Louis who is gay, filed a proposed constitutional amendment this week that would go before voters in November. Colona was joined by 30 of his Democratic colleagues as co-sponsors.

What DOMA means for Missouri

The Supreme Court struck down the Defense of Marriage Act, or DOMA Wedensday. It’s  a provision of a federal law that denies federal benefits to married gay couples.

For the states that have legalized gay marriage (12 of them, and the District of Columbia), it’s clear what the impact of this decision will be for same-sex couples in those states.  Their spouses will now be entitled to the same federal benefits as straight couples, which was not the case in the past. But the result is murkier in the other 38 states where gay marriage is not legally protected (like in Missouri).

ACLU to file suit against Missouri over same-sex marriage

ACLU's Diane Balogh said Tuesday that the suit will be filed in state court in Kansas City, but she would not discuss specifics. News conferences announcing the litigation are planned for Wednesday morning in Kansas City, St. Louis, Jefferson City and Springfield.

It's unclear if the ACLU suit will challenge Missouri's constitutional ban on same-sex marriages or if it would simply seek recognition of gay marriages from other states.

Gov. Jay Nixon says Missouri voters should have another chance to vote on gay marriage and that he would vote to allow such unions.