Kendric Carlock graduated from St. Louis Public Schools in 2014 with a 2.0 GPA. His parents never went to college. His family didn’t have a lot of money. His odds of attending college were, by all measures, not great.

But the magnet-school grad was determined. With the help of his guidance counselor, Carlock found a space at Missouri Southern State University in Joplin. In the fall, he’ll be a senior in the communications department.

That puts him in rare company, as fewer than 30 percent of first-generation college students graduate in four years, according to a 2011 study from UCLA’s Higher Education Research Institute.

By advocating for himself and seeking out the help of mentors, Carlock has navigated the barriers that keep a lot of people in his situation from getting this far, even if he’s struggled in some classes.

One piece of advice he learned while at Central Visual and Performing Arts High School: Communicate with professors.

“There (have) been times where I know my computer is acting up and it may not allow me to do my homework or get it completed on time,” Carlock said. “I knew that the best place to do is to be — to have that open conversation and be upfront with your professor and allow them to see what they can do to help you.”

The cost of college — tuition, room and board — is another major issue that could have derailed low-income students like Carlock. By choosing a public university and qualifying for a theater scholarship, he said he’s been able to fill in the gaps left by his need-based federal Pell grants.

“My first year I took out loans, but now I am completely loan-free,” said Carlock. “That is a great deal.”

Even more important to Carlock are his mentors. And that’s good, according to University of Missouri-St. Louis public policy professor Terry Jones, who says support can increase the odds of a first-generation college student earning a degree.

A 2017 report from the Pell Institute found that just 12 percent of adults in the country’s lowest income bracket have a bachelor’s degree by the age of 24.

“To the extent there is a silver bullet, it’s establishing a close relationship with at least one faculty member or staff member at that college or university who will take a personal interest in that student. Someone to go to,” Jones said.

One of the people Carlock looks to for advice is Laura Winter, who runs a summer drop-in center in St. Louis where high school graduates can get help with financial aid paperwork. 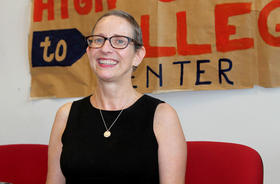 The two met the summer before Carlock started at Missouri Southern. He had stopped by looking for a way to get to Joplin. Both Winter and Carlock’s high school counselor offered him and his family a ride.

“You don’t find many teachers, or people in education for that level, who will just give away their weekend and just drive you down there. So it was truly, truly special to me,” Carlock said.

The following summer, Carlock interned for Winter. During the school year, the two stay in touch.

“If something comes up, he will call me and say I’m having trouble with something, can you help me? He sends me texts on my birthday and on Mother’s Day and just checks in,” Winter said.

Carlock is doing well in college because he’s willing to ask for help, she said, and also realizes he has a lot to offer.

“He has that resilience and that capacity to go out and talk to people and say, ‘I really need your help, and I think you can help guide me and advise me.’ That’s a hard thing for people to do,” Winter said.

Carlock describes it as using his voice and knowing his self-worth. And he’s been inspired to help other first-generation students succeed. Carlock, who’s black, started a black student union to give his classmates a place where they can turn for support in overcoming what stands in their way of a degree.

“While I was making the transition, and everything was coming together for me because I was willing to put myself out there to get help, there were other students who looked like me who didn’t have those resources, or didn’t feel comfortable reaching out for help,” Carlock said. “I felt like they needed a resource that would allow them to step out of their comfort zone.”