Discussions about removing the Christopher Columbus statue in Tower Grove Park have re-emerged.

Activists have banded together to plan an event, Plotting in the Park for Columbus removal. The event, posted on Facebook, takes place on Sept. 1. The brainchild of Chris Singer, the gathering aims at reaching out to community members to discuss what actions can be taken to remove the statue. Singer said Columbus’ controversial conduct with indigenous peoples should not be celebrated.

“A statue to a person is an act of glorifying that person in some respect,” Singer said. “What Christopher Columbus represents, and what he did to the Taino people, is not something that needs to be glorified.”

Singer said this is not the first time action has been taken against the statue. Several years ago, multiple protesters graffitied the statue.

“The parts of history that statues like Columbus glorify are ones that we should examine, so that we can understand the impact that the histories have on our present-day circumstance,” Singer said.

A separate commission developed by Tower Grove Park administration will also re-examine the historical context of the statue. The commission is made up of Italian and Native American community members, city officials, members of the National Park Service and the Missouri Historical Society and more.

Reininger said there is no date set for when the first meeting will take place, but he hopes it will be in September.

“There’s a lot of different sides of this, and each group has their own perspective,” Reininger said. “I think it’s going to be a very interesting meeting with a facilitator of this commission to really listen to everybody's different sides.”

Reininger said several people associated with the Facebook event have been invited to join the commission. Singer said while he believes this is a good start, he remains somewhat skeptical of what will come from the commission.

“I’m happy that they’re working on the commission, but I am guardedly optimistic,” Singer said.

Listen
Listening...
/
Sen. Claire McCaskill speaks to the press about the Columbus statue on Aug. 30. She said the statue could serve as a reminder of the history that shouldn't be repeated. 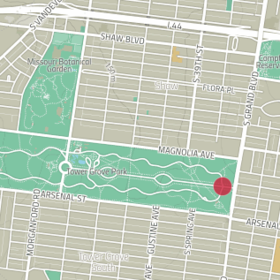 Tower Grove Park is a National Historic Landmark. This status has the potential to complicate the removal of any monument.

Mares said he isn’t aware of how significant the statue is to the park. He said it is rare for a park to lose its National Historic Landmark status. The State Historic Preservation Office could decide the statue is not essential to the overall image of the park and the park could still retain landmark status, Mares said.

“It’s a badge of honor that no one really ever wants to lose,” Mares said. “I think if it were determined that the statue would threaten that, it would be a much tougher decision.”

The statue is one of four large statues located in the park. The Columbus statue was dedicated in 1886 and was built by Ferdinand von Miller.