On the Trail: How Greitens as governor presents big opportunities to GOP state lawmakers

On the Thursday after his resounding victory in the Missouri governor’s race, Eric Greitens spent the morning at the Missouri Capitol meeting with Gov. Jay Nixon and huddling up with the Senate Republican supermajority. Greitens ended up shaking lots of hands of fellow Republicans who could help make his campaign agenda into the laws of the land.

When he stepped into the Capitol hallways, Greitens could hardly contain his enthusiasm about the months ahead.

“We’re very excited,” said Greitens in a brief interview with reporters after leaving his meeting with Senate Republicans. “We think that the people voted to take this state in a new direction. And I’m excited to work with the legislature to make that happen.”

Greitens has good reason to be bullish.

Never before in Missouri has a Republican governor come into office with so many GOP lawmakers in the General Assembly. That reality could produce a major paradigm shift for public policy in Missouri, especially when it comes to overhauling Missouri’s labor and education laws.

Even though Greitens made some lawmakers more than a little annoyed with parts of his campaign rhetoric, many Republican legislators are more than willing to put the campaign behind them to pass elements of their agenda.

“He’s got young kids and I want my daughter to babysit for him, so I didn’t say anything bad to him at all,” said Senate Majority Leader Mike Kehoe, R-Jefferson City. “People go out and campaign on different issues. I don’t consider myself  a corrupt person. I don’t consider the senators I serve with on either side of the aisle corrupt people. It is what it is. That’s what you do to campaign. And that’s how it goes.”

For the past eight years, Republicans had to contend with Democratic Gov. Nixon’s veto pen. That meant that if the GOP wanted to pass something particularly controversial, they needed at least 109 state representatives and 23 senators to overrule Nixon’s objections. 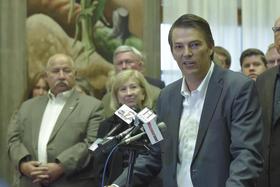 With Greitens in office, lawmakers will only have to pass bills that the governor supports by simple majorities —which shakes out to 82 votes in the House and 18 votes in the Senate. And that won’t be that difficult. By next year, the GOP will hold 117 House seats and, when Lt. Gov.-elect Mike Parson’s heavily Republican Senate seat is filled, 25 Senate seats.

“It will be certainly be nice to have to count to 82 instead of 109 on some things for a change,” said House Speaker Todd Richardson, R-Poplar Bluff. “This is a historic and really a unique opportunity for us in the legislature and with the governor’s office to be able to really impart some lasting positive change on the state.”

One priority that GOP lawmakers like Richardson weren’t able to pass under Nixon’s governorship is right to work, which would bar unions and employers from requiring workers to pay dues. Since Greitens supports that proposal, even the most stalwart proponents of organized labor believe right to work in Missouri is inevitable.

Senate President Pro Tem Ron Richard, R-Joplin, said lawmakers would act quickly. “That will probably be the number one issue,” he said, adding that the Senate would also pursue changes to the state’s legal and regulatory statutes.

It’s not just labor-related bills that could finally get over the legislative hump.

Even before he was elected to the governorship, Nixon promised to veto any piece of legislation that provided any public aid to private schools. Greitens sharply criticized Nixon’s “line in the sand” earlier this year, which suggests that he wouldn't rule out signing piece of legislation that advanced elements of the "school choice" agenda — such a bill that allowed students in unaccredited school districts to transfer to nonsectarian schools.

“I’m looking forward to being able to get some big things done,” Richardson said. “We all run for office because we have thoughts and ideas about where the direction of the state should go. And to have the opportunity to spend my last two years as a speaker with the ability to do some of those big things is unique and something I’m personally very, very excited about.”

One of the most common questions posed to GOP legislators last week was whether they were perturbed by Greitens’ rhetoric during his campaign. 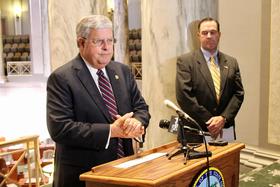 Over the past few months, Greitens often savaged what he saw as corruption in Jefferson City. And since Republicans control the legislature, some GOP legislators weren’t exactly thrilled.

But there's little evidence that Republican lawmakers are taking Greitens' campaign talk terribly personally. Richard echoed Kehoe in response to a question about whether Greitens' rhetoric cast a pall on his relationship with the legislature: “I’m not corrupt, so I don’t worry about it.”

Senator-elect Caleb Rowden, R-Columbia, also said his colleagues likely wouldn’t hold grudges against Greitens for what he said on the campaign trail. And even though lawmakers haven’t accepted Greitens’ desire to ban lobbyist gifts and expand the cooling off period before a lawmaker can start lobbying, Rowden said that could change soon.

“We all say things during campaigns to get elected,” Rowden said. “The nature of this campaign being an outsider year, I think he said what a lot of people were feeling. And me being the guy who has pushed ethics reform for now two going on three years, I think some of the things he said are not completely inaccurate. So I think we all have to work together to continue to fix that perception problem and make sure the trust between the people and the legislature is solid.”

Sen. Paul Wieland was somewhat lukewarm about Greitens’ candidacy. He cited Greitens' opposition to a constitutional amendment allowing certain businesses to deny services to same-sex couples, as well as how Greitens wasn’t initially responsive to anti-abortion rights groups like Missouri Right to Life.

But Wieland said he’s heartened that Missouri Right to Life rated Greitens as “pro-life," which he said is a good sign for social conservatives. (Greitens emphasized throughout the campaign he opposed abortion rights.)

“I think there’s room where we can work together on that particular issue,” said Wieland, R-Imperial. “On some other issues? I guess that now that he’s the governor, it’s my job to start loving it into him. Telling him ‘here’s why we need to do things the way we need to do them.’ And I’ll be making those efforts to do those.”

“I think on probably most things, we’re going to agree on,” he added. “And I’m hoping I’ll find things I can get excited about that we agree on.”

One other beneficial element to Greitens’ relationship with the GOP legislature could be Parson. The Bolivar Republican forged solid relationships with many Republican legislators, and could assist Greitens in getting parts of his agenda passed. (And since Greitens and Parson belong to the same party, it’s possible Parson could get more responsibilities – such as getting to be acting governor when Greitens is out of the state.)

Meanwhile, the next four years will be rough for Democrats in the House and Senate superminority. 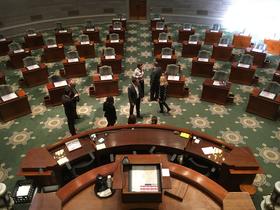 Because their numbers are so low, Democratic legislators will have very limited opportunities to stop bills that Greitens and Republican lawmakers support. It is possible they can play a role when there’s disagreement between the executive and legislative branch, as was the case from time to time when Gov. Matt Blunt was in office.

“I knew going in that, if my party didn’t win the governor’s office, there would no longer be the protection of the veto pen,” Walsh said. “So it’s something as a caucus we’ll learn to deal with.”

Incoming House Minority Leader Gail McCann Beatty, D-Kansas City, said that it would be challenging for House Democrats to operate in the superminority. But she added her party “still stands for quality education,” and will still be pushing for “quality and affordable health care and living wages.”

“I think there will be some areas where we will have some impact,” Beatty said. “It just kind of depends. It’s hard to keep 117 people together. And like I said, we will be fighting for those things that are important to working people.”

While Sen.-elect Jake Hummel isn’t exactly enthusiastic about complete GOP dominance of the executive and legislative branch, the St. Louis Democrat said great responsibility could have some downsides.

But some Democratic lawmakers like Sen. Jamilah Nasheed, D-St. Louis, are willing to give Greitens a chance.

Nasheed said the fact that Greitens is a former Democrat and the first governor in roughly a century to live in St. Louis before his gubernatorial term starts could set him apart from his GOP colleagues.

“I think when you have a governor from a certain geographic area, then they tend to get it when it comes to what needs to be done,” she added. “I think there will be a soft spot for the city of St. Louis, which I think is a good thing.”

Nasheed also said that when she was in the House during Blunt’s Republican governorship, she was able to get plenty of things done.

“I knew right away that I was going to have to figure out a strategy to work across party lines in order to get anything done for my constituents back home,” Nasheed said. “I could have just advocated, agitated and aggravated. But I decided to do something different. And that was to push the bipartisanship buttons. And I was able to do that.”