Vice President Mike Pence is speaking out against an act of vandalism this past weekend that left 154 gravestones toppled at one of Missouri's oldest Jewish cemeteries.

Pence made a surprise stop at Chesed Shel Emeth Cemetery in University City on Wednesday afternoon, where more than 700 people gathered to help clean up and attend an interfaith vigil.

Pence said the outpouring of support showed "the heart of the state."

"There is no place in America for hatred or acts of prejudice or violence or anti-Semitism," he said. "I must tell you, the people of Missouri are inspiring the nation by your love and care for this place, for the Jewish community in Missouri, and I want to thank you for that inspiration for showing the world what America is really all about." 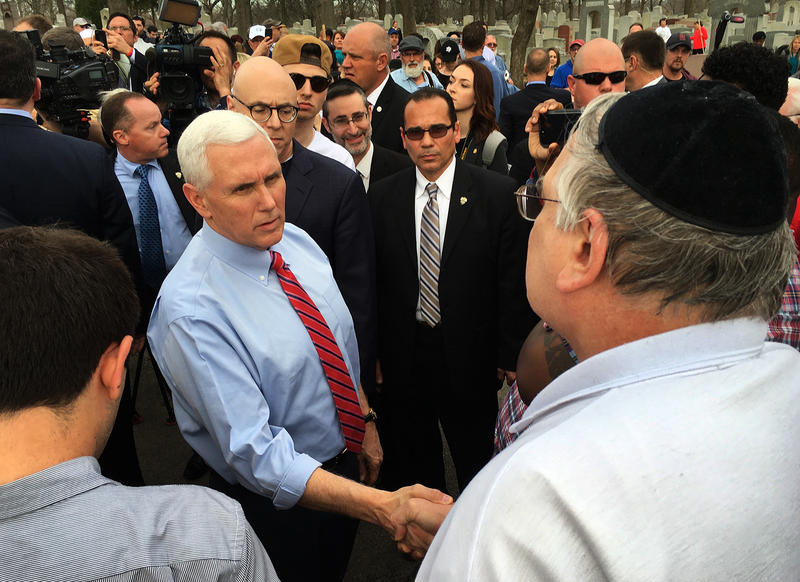 Earlier in the day, while speaking at a Fabick Caterpillar plant in Fenton, Pence said the incident was "a sad reminder" of the discrimination and anti-Semitism that still exists among some people. He also emphasized that President Donald Trump has condemned what happened.

Both Pence and Republican Missouri Gov. Eric Greitens toured the cemetery to see the damage. Greitens said Trump had called him to "thank all of you for standing up in the fight against anti-Semitism."

During the prayer service, Greitens said the state is showing that it can "come together through acts of beauty and love and service and demonstrate what we're capable of." 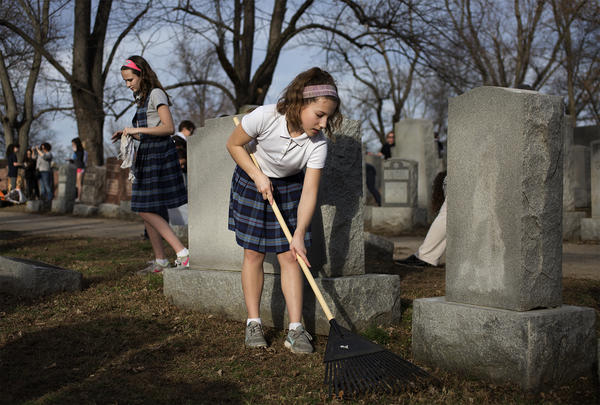 Andrew Rehfeld, the head of the Jewish Federation of St. Louis, praised Greitens for speaking at the prayer service and showing leadership “to send a clear and decisive message against hate and bias.”

Anita Feigenbaum, the executive director of the Chesed Shel Emeth Society, thanked the many organizations who attended the clean-up and prayer service.

"In the Jewish tradition, we take utmost care to give respect to our deceased and by you coming out here today, you are helping to once again give respect to all the deceased here," she said.

Rori Picker Neiss, the executive director of the Jewish Community Relations Council, which organized the interfaith prayer service, said the gathering was an act of "healing."

"It means so much to all of us to see everybody who has come out to show support, to show the unity of our community and to show that together we can repair anything that's broken," she said.

Several Jewish and interfaith leaders, including Deacon Carl Sommer of the St. Louis Archdiocese and Mufti Asif Umar of the Islamic Foundation of Greater St. Louis, also spoke during the vigil.

Rehfeld said the event showed that the broader community supports justice and anti-bias. 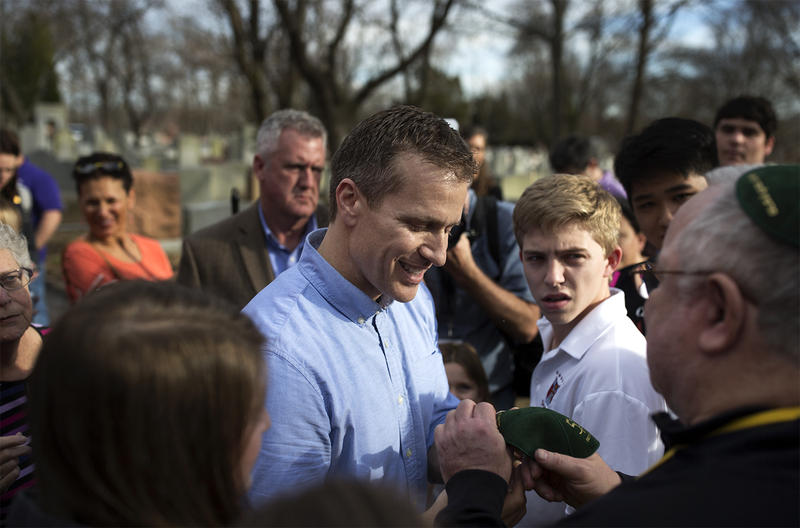 Aly Bennett, who said she is Jewish, heard from her Catholic coworker about the event. They both decided to attend.

"When people try to knock down a community or knock people down, it doesn’t do that. It brings people together and makes them stronger and makes them a better unit for the future," she said.

Adil Imdad, chairman of the West Pine Mosque, said he came out to show his solidarity with the Jewish community.

“What they’ve gone through is almost what we the Muslims have been gone through," he said. "The same thing in this country: a lot of hatred. So they are going through this hatred so we are all together as a minority.”

The crowd was not only interfaith but also bipartisan. University City Mayor Shelley Welsch said her city was one of tolerance and openness.

"Many of those buried helped make this community the welcoming place it has always been," she said. "It is my hope that together we can speak forcefully against the rhetoric being heard in our community and around the country that somehow would lead some people to believe that this type of destruction in this holy place would in any way be acceptable."

Democratic Congressman Lacy Clay of St. Louis said he lives near the cemetery and was was upset to see the "destruction," but was hopeful.

"I look around and I see people assembled here are a symbol of love," he said. "We will not let hateful acts stop us in our journey to show what love is really all about."

The cemetery also has received an outpouring of financial support from religious groups and the community at large. A crowdfunding campaign started by Muslim Americans has raised over $85,000. Faizan Syed of the Council on American-Islamic Relations-Missouri said the Imam Council of Metropolitan St. Louis will be holding local fundraisers at Islamic centers to raise more money. And Rehfeld said his group has raised more than $75,000 from 750 donors for restoration and security at the cemetery.

But those funds may not be needed. The Rosenbloom Monument Company across the street has been working for free since Tuesday morning to repair and right the gravestones, sales manager Jonathan Usprich said. 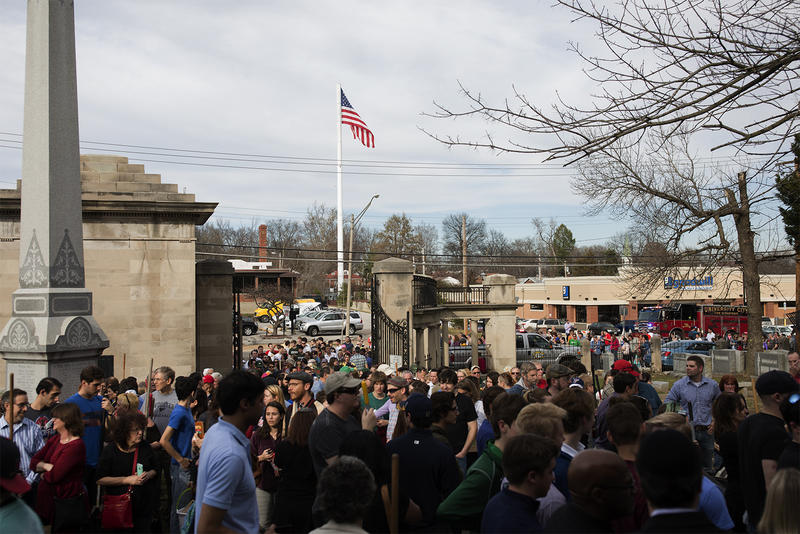 Six stone-setters were hoisting the stones back onto their pedestals, he said, adding that most of the monuments that were knocked over date back to the 1920s and '30s — if not earlier.

“… Then just the final clean-up of getting the monuments down and caulked to the bases — I would say if they don’t finish it by Friday it would be by sometime early next week,” he said.

The vandalism has prompted a group of Jewish cemetery and funeral directors to plan to strengthen security. Barry Needle of the United Cemetery Association, which runs three area Jewish cemeteries, said the group met Wednesday to consider various security companies. He also said there is more of a police presence.

“We didn’t perceive as great a need until the present situation,” he said. “Times have changed. So now we have to be vigilant in providing that security.” 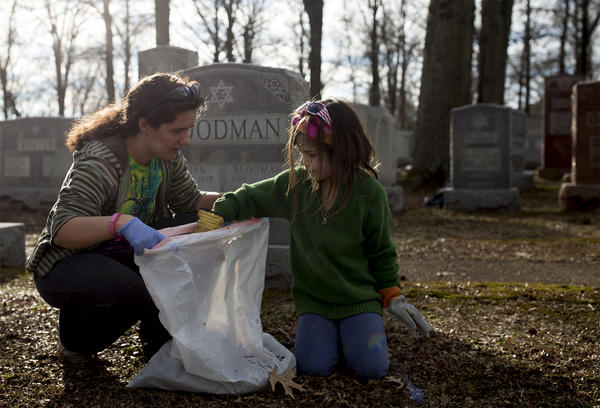 But Needle said the community response has been “heartening.”

“If there was a sinister intent, the effect is perhaps the opposite of what they wanted,” he said. “People of bad will will be shown that the force of good will is much bigger.” 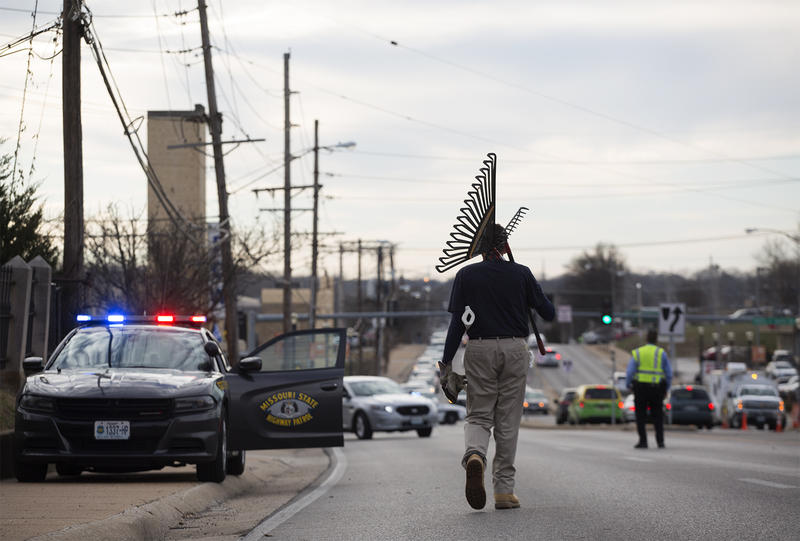 Still, the Jewish Federation's Rehfeld said the vandalism has been a “wake-up call," even though police have not said if it is being investigated as a hate crime.

"Was this an act of anti-Semitism? We don't yet know, but in some ways it doesn't matter," Rehfeld said.

He said in the face of such acts and threats to Jewish centers across the country, the Jewish community must be ready to “name it, condemn it and to actively do something about it.”

Jason Rosenbaum and Marie Schwarz contributed to this report.