Wild mustangs find sanctuary in the peaceful countryside near Edwardsville

Kathy Lewis was trying to coax a small herd of mustangs into a corral at her Legendary Mustang Sanctuary near Edwardsville. It was just after a dawn on a frigid December morning, and heavy rains were on the way.

Eventually, Nellie, a 9-year-old red-and-white pinto, moseyed in from the pasture to breakfast on dollops of fresh hay scattered about the enclosure. Behind her trailed four mustangs and a burro named Shorty that once roamed free out West. They’ve all found new lives — and their own herd — in the Madison County countryside.

As the mustangs munched with gusto, Lewis scratched their necks. Scooter, a black-and-white pinto, nuzzled her, searching for treats in her pockets.

“These animals used to be wild. Now, they’re just here, walkin’ around,’’ Lewis said, smiling at the thought.

For 10 years, Lewis and her husband Shawn have rescued wild horses — free spirits from the American West — and cared for them on their 35-acre farm. So far, they’ve found homes for more than 100 wild horses that once faced uncertain and, sometimes, dire futures.

“They’re an American icon. They’re a legend,’’ Lewis said, proudly. “And each one that we bring in is one more that gets a new chance on life.” 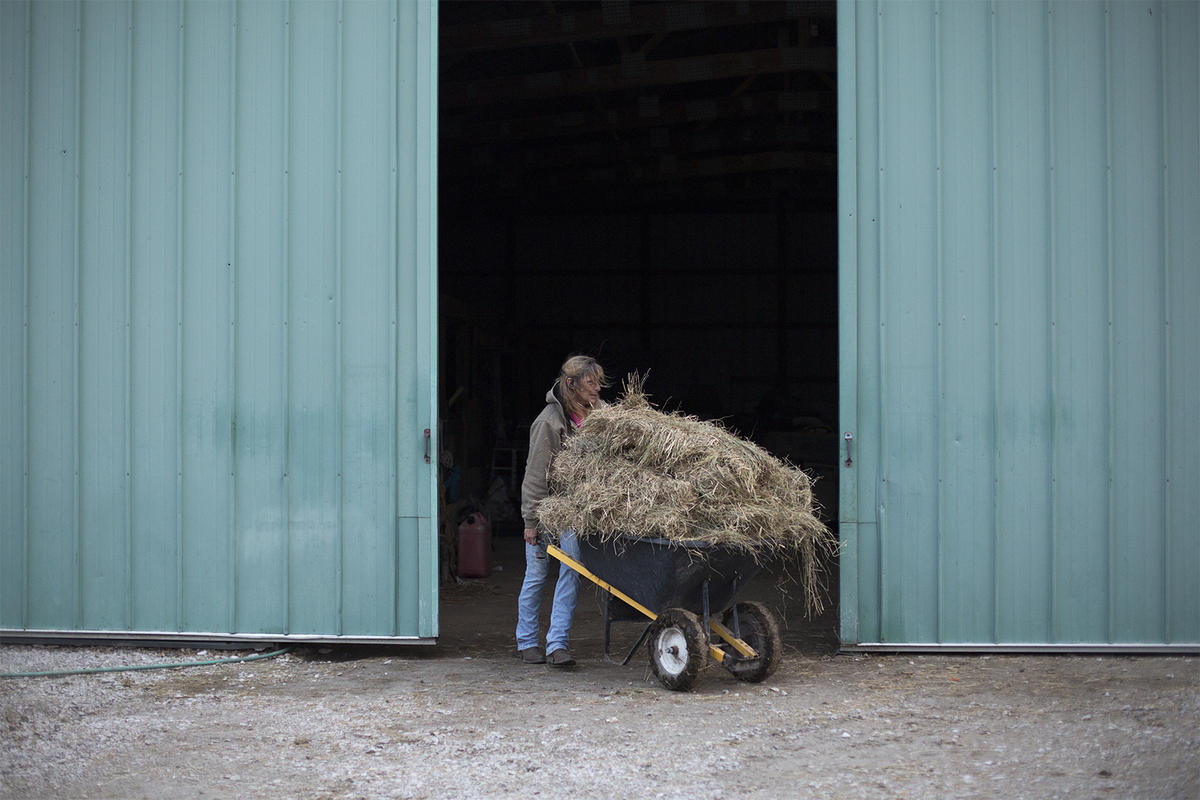 Caring for legends is hard work

The Lewises get some mustangs directly from the federal Bureau of Land Management, which manages herds of wild horses and burros on public lands in western states. The agency rounds up thousands of wild horses for adoption or sale, but many end up in long-term holding facilities.

Sometimes, private owners ask the Lewises to take their mustangs, because they don’t know how to handle them, or can’t afford to take care of them, Shawn Lewis said.

The sanctuary is more than 1,000 miles and a world away from the open range where wild horses run. Here, there are fences. And noise — including a low but steady rumble from traffic that can be heard but not seen as it zooms along Interstate 55, several miles to the west.

The sanctuary’s resident herd of five mustangs — plus Shorty — spends most of its days lolling about a 30-acre pasture where there’s room to run and kick up their heels.

“This is the closest they’re ever gonna get to being in the wild again,’’ Kathy Lewis said.

But with the weather forecast calling for two days of drenching rain, Lewis had to bring them in for shelter.

“Usually, if it’s gonna be bad weather, we bring them up into the lot by the barn. That way they can go into their stalls if it’s bad out,’’ Lewis said. “They’ve got their own bedrooms.” 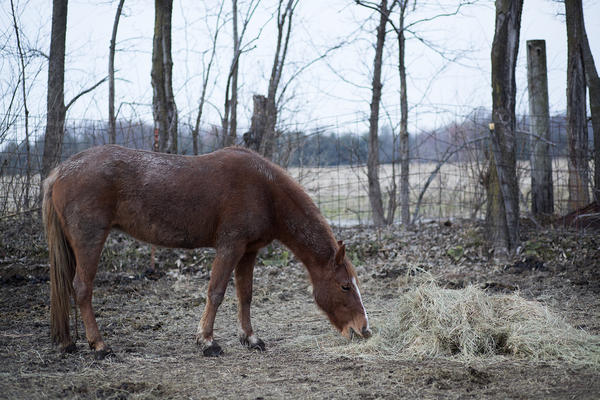 The “permanent residents” serve as ambassadors of goodwill for the sanctuary. The Lewises take them to parades and community events to educate people about the plight of America’s wild horses. Nelly and Shiloh are from Nevada. Ciqala is from Oregon, and Fred is from Wyoming.

The Lewises also care for a handful of mustangs they are preparing for adoption.

The first lesson that Kathy Lewis, 59, teaches people who are interested in a mustang is that caring for legends is hard work.

It was still dark when she began this work day, just as she always does, shoveling poop. She tries to clean the pens three times a day.

The mustangs at the sanctuary all have a story, Lewis said, as she pulled the honeywagon through the corrals.

They rescued Strawberry and Abbie from a woman in Missouri.

“They were skin and bones,’’ said Lewis, as she shoveled. “Their chests were real narrow. They needed lots of groceries.’’

Blackjack is a prison baby.

“He was born in Canon City, Colorado, in the state prison,’’ she said. “They bring the horses in, and they have the prisoners gentle them down. Then they put them up for adoption.” 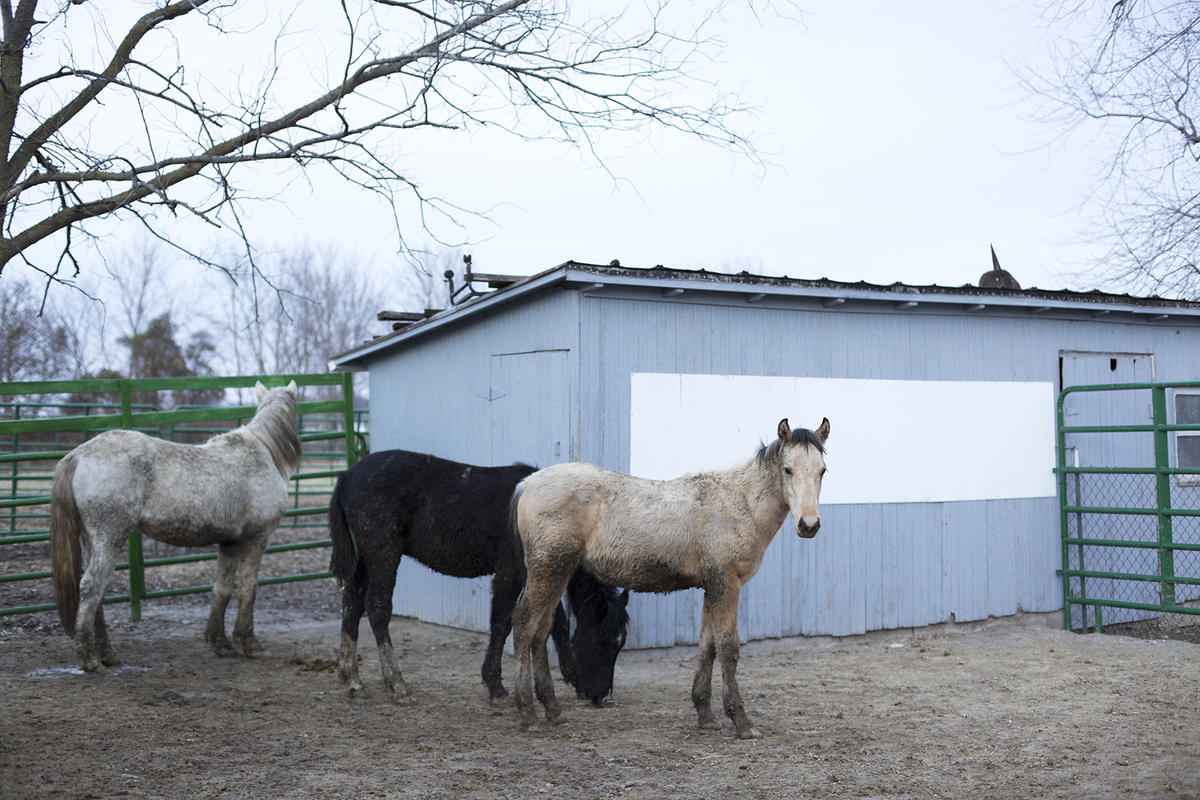 'They’re not going back to the wild'

The Bureau of Land Management oversees 177 herds of wild horses and burros that live on nearly 27 million acres of public land in Arizona, California, Colorado, Idaho, Montana, the Dakotas, Nevada, New Mexico, Oregon, Washington, Utah and Wyoming. Most are descendants of animals that were released or escaped from Spanish explorers, ranchers, miners, the U.S. Cavalry and Native Americans.

To prevent overpopulation and overgrazing, the agency rounds up thousands of horses and burros for adoption or sale. It’s a controversial program, with environmentalists, conservationists, biologists and ranchers at odds over the best way to deal with the plight of the animals and the land on which they live.

In 2018, the agency was caring for 46,000 wild horses and burros removed during roundups and kept in off-range corrals. Most are in holding facilities in western states. A facility in Ewing, Illinois, about 100 miles southeast of St. Louis, is the easternmost facility. It serves 31 states east of or bordering the Mississippi River.

The numbers are daunting. But Lewis said her little sanctuary does what it can to save mustangs, one legend at a time. Last year, they found permanent homes for 13 wild horses and burros.

“They’re not going back to the wild,’’ she said. “So when we bring them in, we know where they’re ending up. And we know they will be there for the rest of their lives.’’

The Lewises work with new arrivals for several weeks to gentle them and get them used to being around people.

The mustangs respond quickly once they know people can be trusted, said Shawn Lewis, 58.

“All horses are looking for a leader,’’ he said. “Once you prove to them you can lead them, they trust you. They’re smart. Teach them anything, and they’ll never forget it. Never.”

People who want to adopt a mustang must also go through training at the sanctuary. And, equally as important, the horses and people must spend time together to see if they’re a good fit, Kathy Lewis said.

“Not one horse has ever come back to us,’’ she said. “And we’re very proud of that.” 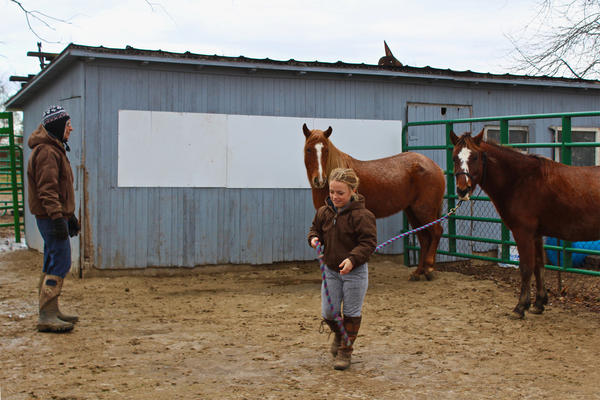 The sanctuary operates as a nonprofit and welcomes donations and help from volunteers. It costs about $30,000 a year to care and feed the animals, said Kathy Lewis, and she and her husband pay for about 70 percent of those expenses themselves.

“We don't spend money on anything but for the horses. We don't care about our house,’’ said Shawn Lewis, smiling, as he pointed to their small weather-worn farmhouse. “We just care that the horses are very well provided for. They get their food and water, and they all get taken care of before we even sit down to eat our breakfast.”

For mustangs and burros still owned by the Bureau of Land Management, the sanctuary collects an adoption fee of $125. That amount is set by the agency. For sanctuary-owned mustangs — those the Lewises rescue from private owners — people who adopt the horses pay a fee of $200 to $500 to cover expenses and veterinarian bills.

Thanks to donations from supporters, the sanctuary expanded its facilities last year and has been granted “storefront” status by the Bureau of Land Management, Kathy Lewis said. That means the sanctuary will be able to house at least 10 adoptable animals, at any given time.

It’s hard to avoid becoming attached to the mustangs they train, Lewis said. But most of the families who adopt keep in touch.

Several days before Christmas, the Lewises took several prospective adopters to the Bureau of Land Management facility in Ewing and helped them select wild horses. After several weeks at the sanctuary, the horses will go to their new homes.

Luke Weller of Springfield stood at a corral watching as the Lewises unloaded two feisty mustangs that he and his daughter picked from hundreds of homeless horses at the holding corral.

Weller decided to adopt mustangs because he wants to do his part to help wild horses.

“We spent a lot of time thinking about making the decision,’’ Weller said. “These two guys will spend the rest of their lives in a pasture — with us. They’ll be with us forever.”