An audit released Tuesday finds that Missouri Attorney General Chris Koster's office has not instituted a policy to guard against conflicts of interest. In response, Koster noted that his campaign organization had instituted changes following earlier news reports about possible conflicts.

The state audit of the attorney general’s office is the first one issued since Auditor Tom Schweich’s suicide. Before his death, Schweich had recused himself from involvement, and the audit was handled by an assistant.

Koster is in his second term as attorney general and is expected to be the Democratic front-runner in next year’s race for Missouri governor. He was hit hard last October by a New York Times article that detailed efforts by lobbyists and corporations to pressure Koster and other states’ attorneys general to either drop investigations or at least settle them for lower amounts. 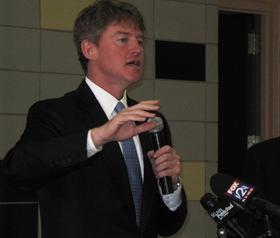 Koster disputed some of the assertions of the Times article, but he also announced in November that he would be adopting “sweeping new transparency measures” intended to prevent future conflicts of interest. They include not accepting donations from individuals or entities involved in cases “currently pending” before the attorney general’s office or that “have been resolved in the past 90 days.”

The audit, however, finds that the attorney general’s office has not yet adopted that proposal as a formal policy, and it further recommends that it adopt “written policies and procedures” to guard against conflicts of interest.”

Despite Koster’s promised reforms, he also defended his office’s actions:

“By design, the litigation attorneys in the AGO have no contact with the Attorney General’s political organization. They are expected to make decisions on their cases based on the facts and law of each case. Whether or not a particular entity, lobbyist, or attorney may be a political contributor is of no relevance, and AGO attorneys spend no time concerning themselves with that issue.”

Koster's political campaign strongly disagrees with the audit's finding that a conflict of interest policy has not been implemented.  Andrew Whalen, spokesman for Missourians for Koster, issued the following statement:

"The audit's summation inaccurately represents the implementation of the conflict of interest policy. The Missourians for Koster Committee has implemented the most stringent conflict of interest policy of any Attorney General in the nation. This policy was adopted by the Committee November 19, 2014 and restricts contributions from individuals and entities or those representing individuals and entities with litigation before the Attorney General's office or litigation resolved in the previous 90 days. The Committee continues administering this policy."

Before the audit was launched, Auditor Tom Schweich recused himself and appointed Otto to handle it. Schweich, a Republican, had announced his candidacy for governor and could have possibly faced Koster in November 2016. Schweich died last month, however, from a self-inflicted gunshot wound.

The audit also cites raises given to more than half of the attorney general’s office employees that exceeded what other state employees received. From January 2012 to August 2014, those who got raises got an average 9 percent pay hike. Most state workers in Missouri got a 2 percent pay raise in July 2012 and a $500 bump in salary in January 2014. The audit also found that the attorney general’s office “lacked a cumulative record of the reasons for raises given.”

“So when we find raises in excess of that, we say, ‘okay, we know you have the authority, you are granted X (amount of) dollars to spend on your office,’” Otto said, “but if they exceed the standard that the governor has put in the budget, we make a point of pointing that out.”

The attorney general’s response to the additional findings includes:

“Missouri law grants the AGO the authority to establish compensation levels for its own employees. The AGO believes it is in the best interest of our state to continue exercising that authority in a fiscally responsible fashion in an effort to bring the best lawyers and staff in the state to the service of our fellow Missourians.”

Outside counsel and expert witness selection:

“The overwhelming majority of cases in which the AGO retains outside counsel … are medical malpractice suits that require a special expertise to defend. When such a case is filed, the AGO has a very short period of time (approximately 3 business days) to refer the case to an attorney who has such expertise… Before an expert witness is retained, the attorney handling the case must submit a form to the Deputy Attorney General explaining the basis for the choice. …The AGO’s rates for outside counsel are not only reasonable and appropriate, they are far below the market rate that one might expect to pay for experienced counsel.”

Endorsement of payments by check:

“Since Attorney General Koster took office, the AGO has stayed well within its travel budget every year. The AGO endeavors to obtain the best rates available when attorneys and staff must stay in hotels or motels overnight for trial or other work-related events.”

“The AGO will implement a process that requires employees to change their passwords every 90 days.”

The full audit can be found here.

This week, Eli Yokley joins us to discuss Attorney General Chris Koster's testimony in front of a special legislative committee Monday. Koster turned the tables on members of the legislature, saying they participated in some of the same conduct but later refused to answer some questions from reporters.