It's not what you say, it's how you say it. It's cliché, but true. For people with mental health disorders, how they say something may be quite different than someone not living with a mental illness.

Dr. Isabelle Bauman, interim department head for communication at Missouri State University, has been studying how mental health influences communication styles, and is writing a book on this work. She gives an example of communication differences.

An interview with Bauman

"Someone who has depression would have longer pauses than someone without depression, and that's also true of someone with anxiety," said Bauman. "It takes only 3/10 of a second in a conversation for somebody to switch a turn. So, if you're pausing for longer than that, people are gonna jump in even though you're not done speaking. So, people with depression and anxiety get interrupted a lot because they pause for such a long period of time in their conversation."

Bauman says that there are differences in nonverbal communication as well.

"A person with anxiety has more self-focused gestures, and by that I mean they will play with their hair, play with their necklace, adjust a sweater or shirt, things that are focused on their own body," said Bauman. "Most people when they're talking have object-focused gestures, and by that I mean gestures focused on something in the room around them, or something that they're talking about."

Eye contact is also minimal for those with depression, she noted.

"Something that's really interesting about bipolar disorder is that people with bipolar disorder don't take advice. You will give them advice and they will nod and smile, and they go out and do exactly what they want," Bauman said.

She also studies how the broader society talks about mental health disorders - or the lack thereof.

According to the National Alliance on Mental Illness, approximately one in five adults in the US experience mental illness in a given year. For Bauman, she says that recognizing that the disorder is affecting communication patterns is one step to improving the conversations around mental health as a whole. It also can serve as a gateway to improving the support system for that person, which is key to mental health.

"I think the most important thing is, have they acknowledged to you that they have a mental health disorder? If they have, to acknowledge that back to them, and be up front with the fact that that is a factor in their life, and that it does affect how they experience the world," said Bauman. "Someone with depression is going to experience the world differently than someone without depression, and it's important for the people around them to recognize that, acknowledge that, and to not just say to them, "Oh, snap out of it. Just think happy thoughts." Well, if you have depression, you can't just think happy thoughts. You can't just snap out of it." 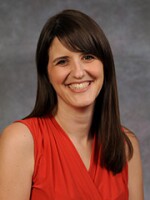 Nicki Donnelson
Nicki received a Bachelor of Science and a Master of Business Administration from Missouri State in marketing, in 2002 and 2004 respectively. After gaining experience in writing, marketing, special event planning, fundraising and public relations, she returned to the university to work as the public relations specialist in the office of university communications. There she tells the university’s story by sharing the stories of individuals at Missouri State.
See stories by Nicki Donnelson