Health & Wealth Desk
KBIA’s Health & Wealth Desk covers the economy and health of rural and underserved communities in Missouri and beyond. The team produces a weekly radio segment, as well as in-depth features and regular blog posts. The reporting desk is funded by a grant from the University of Missouri, and the Missouri Foundation for Health.Contact the Health & Wealth desk.

In June, the Supreme Court overturned Roe v. Wade and nearly immediately, Missouri followed suit – outlawed abortion in all cases except when a “woman” is experiencing a “medical emergency.”

From the wording of legislation to the conversation about who is impacted, abortion access is generally viewed as a women’s rights issue. However, cisgender women aren’t the only stakeholders when it comes to how abortion connects to healthcare and bodily autonomy.

And the concerns about the impacts of this decision on the transgender and nonbinary community began back when the draft decision written by Justice Samuel Alito was leaked back in May.

“It was devastating news. But after the last two years, everything has been really devastating news,” Quinn Calvert said. “So, it just kind of felt like another awful thing I have to store in my mind. And like just another hurdle that I hope I never have to deal with again.”

And this issue was especially personal for Calvert because in 2013 they had to get an abortion of their own.

Even then, there were lots of barriers: Missouri has very few clinics that offered the procedure, the Missouri legislature was starting to pass TRAP [Targeted Regulation of Abortion Providers] laws, Calvert had to drive hours to get to their appointment, and competent care for transgender and nonbinary people – like Calvert – was very limited.

“Those who already don’t have a lot of access to healthcare, who live in poverty, who experience a lot of violence because of their identity are going to have even more inaccess."

According to a 2017 Guttmacher Institute report, only 23% of abortion providers had transgender and nonbinary inclusive care. That number came years before the more recent waves of anti-transgender legislation.

“A trans person being able to access an abortion is medical care in more ways than one because yes, it would help them stay child free, but also like a trans person carrying a child that can be really dysphoric in really affect their mental health,” Calvert said.

Shira Berkowitz, the senior Director of Public Policy and Advocacy at PROMO, an advocacy group that works to protect LGBTQIA+ rights in Missouri, said this could have a uniquely dangerous effect on transgender and nonbinary individuals with uteruses.

“When we have the right of bodily autonomy, we're giving health care access, often to people who are very skeptical to seek that access in the first place,” Berkowitz said. “And then when we take that access away, we're harming that community even further.”

Now that Roe v. Wade has been officially overturned and Missouri outlawed nearly all abortions, Berkowitz is even more concerned about the intersectionality of issues that transgender and nonbinary people already face.

“Those who already don’t have a lot of access to healthcare, who live in poverty, who experience a lot of violence because of their identity are going to have even more inaccess, specifically because in a state like Missouri, there are already a very few providers of this type of care,” Berkowitz said.

“For us to continue on, just like, living a life, in a body that we’re happy with having access to abortion is important."

Quinn said that their frustration with this loss of necessary medical care left them with a question: “Okay, the government hasn’t been and will not take care of us, so, how can we come together as a community?”

Ojeda, a healthcare policy advocate with the National Center for Transgender Equality, pointed to grassroots organizing as a solution.

“Listen to organizers because they’ve been doing this work for a long time,” Ojeda said. “They know that this was coming up. They saw it from, you know, even when major newspapers and the Democrat party, quite frankly, didn’t know this was coming, organizers knew. And so, it’s really about, taking the lead of Black, and brown, trans and queer organizers on the ground, and making sure that we’re supporting their work as much as possible.”

Back in Missouri, Quinn said that even though abortion was legal when they received their care, they still tried some potentially dangerous means in an attempt to terminate the pregnancy. So, they want people to remember that safe and accessible abortions are a vital part of healthcare for trans and nonbinary individuals as well.

“For us to continue on, just like, living a life, in a body that we’re happy with having access to abortion is important,” Calvert said.

A list of trans inclusive providers compiled by The Center Project can be found here: https://thecenterproject.org/gender-affirming-provider-list/ 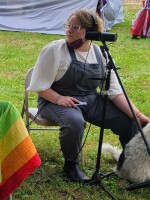 Abigail Ruhman
Abigail Ruhman is a reporter and afternoon newscast anchor for KBIA. They are working on a special series, and have produced for KBIA's Missouri on Mic and Missouri Health Talks in the past.
See stories by Abigail Ruhman
Related Content