How St. Louis’s literary past is coming to life in the Central West End

The history of St. Louis’s Central West End is steeped in literature. The area is tied to four of America’s most famous writers: T. S. Eliot, Tennessee Williams, Kate Chopin and William S. Burroughs. But until recently, the neighborhood had no official tributes to the literary greats.

As part of Word Missouri, an ongoing series about Missouri’s literary heritage, KBIA’s Davis Dunavin looks at one neighborhood group’s efforts to change that. 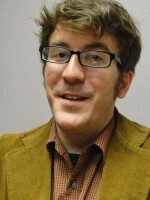 Davis Dunavin
Davis Dunavin grew up in the bootheel of Missouri and worked for the Southeast Missourian and Off! Magazine before moving to New York City in 2006, where he worked as a freelance writer and a bookstore clerk. He's a Masters student in Journalism at the University of Missouri-Columbia, and served as a Convergence Journalism teaching assistant at KBIA before launching the Word Missouri project in August. He lives in Columbia with his wife Elizabeth, coincidentally also a bookstore clerk and organizer of the Cold Reading poetry series at Get Lost Bookshop in downtown Columbia. When he's not there, he can sometimes be found leading a double life as a street musician.
See stories by Davis Dunavin