A big weekend is ahead in Columbia. The True/False Film Fest takes over downtown Columbia starting Thursday. Also rolling into action Thursday is the National Intercollegiate Wheelchair Basketball Tournament at MU's Rec Center. Both events are previewed on this week's Thinking Out Loud on KBIA.

Columbia's David Wilson is a True/False Film Fest co-conspirator. When the documentary-centric film festival began in 2004, Wilson recalls that:

Our goal was to fill what we saw was a void. We thought there were really amazing non-fiction features coming out. Movies that were theatrical and thrilling and had great story lines and great characters and just happened to be true. They were getting some play in theaters, but weren't getting their due in the film festival world. We thought maybe there is a need for this new documentary community to come together and really celebrate this kind of filmmaking.

Coming to Columbia for True/False or the wheelchair basketball tournament this weekend? Need a hotel room? The conventional wisdom might lead you to think that available lodging was nil, but that's not the case. Wednesday morning Columbia Convention and Visitors' Bureau Marketing and Communications Manager Megan McConachie said visitors next weekend to Columbia arriving without a room booked "should have good luck. There are properties throughout Columbia with vacancies." 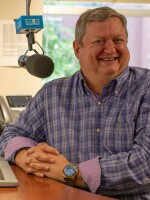 Darren Hellwege
"The Voice Of Columbia," Darren Hellwege has hosted NPR's “Morning Edition” for over 30 years on KBIA, and serves as host/producer of the award-winning “Thinking Out Loud” programs. He also hosts “Vox Humana” on Classical 90.5 FM. Darren is also a marketing representative for KBIA and Classical 90.5, helping businesses connect with their customers using public radio.
See stories by Darren Hellwege
Related Content