Inspectors are going through the rubble of a historic-document museum in St. Louis trying to find the cause of a fire that heavily damaged the building. The former church in south city has been home to the Karpeles Manuscript Library Museum since 2015.

“As far as the actual exhibits, we saved those,” said museum director Kerry Manderbach.

“I pulled the exhibits out myself, and the firefighters were also pulling things out right and left,” he added.

Many of those firefighters picked up manuscripts and other documents as they raced out of the building when it appeared the ceiling was going to collapse.

“They knew they were in a museum,” St. Louis Fire Chief Dennis Jenkerson told reporters.

“It’s like, 'Don’t leave empty-handed. Grab something, and get it out of here,'” he said.

The effort continued after the fire was out Tuesday night.

“It was amazing to me to see these guys in fire uniform after the fire was out carrying out all of these artifacts,” said Frank Absher, who is the founder and executive director of the St. Louis Media History Foundation, which was housed in the building.

“Everything from a microphone from the 1940s to one of Dr. Karpeles model ships,” he added.

Future of the museum and building unclear

The Foundation now has to find new space.

“There is no way we can keep a museum there,” Absher said. “At this point, I’ve got to get all our stuff out of there. Find a place to store it, and find a new museum site.”

And the fire comes a few days before one of the organization's biggest events of the year. The foundation’s hall-of-fame induction is taking place Saturday, so Absher doesn’t have time to get emotional.

“You have to stifle emotions and go on autopilot for a while. And that’s what I’ve done.”

Manderbach said his past few hours have been frantic.

“I don’t think my heart has slowed down yet,” he said, while adding, “I was devastated, and it was beyond belief to me that it was happening.”

Manderbach said there is a slight possibility the building could be saved, but the decision on the future of the St. Louis museum rests with California collector Dr. David Karpeles.

He has a network of museums throughout the country that focus on rare documents.

Manderbach said Karpeles has to determine if it’s worth repairing the building or buying another building and starting a new museum in the St. Louis region. 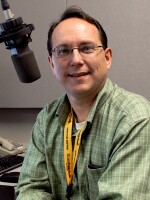 Wayne Pratt
Wayne Pratt is a veteran journalist who has made stops at radio stations, wire services and websites throughout North America. He comes to St. Louis Public Radio from Indianapolis, where he was assistant managing editor at Inside Indiana Business. Wayne also launched a local news operation at NPR member station WBAA in West Lafayette, Indiana, and spent time as a correspondent for a network of more than 800 stations. His career has included positions in Sydney, Nova Scotia, Toronto, Ontario and Phoenix, Arizona. Wayne grew up near Ottawa, Ontario and moved to the United States in the mid-90s on a dare. Soon after, he met his wife and has been in the U.S. ever since.
See stories by Wayne Pratt