More than 280,000 properties in Missouri are at risk of flood damage, according to a nationwide study of flood zones.

That's nearly twice the number estimated by the Federal Emergency Management Agency, say researchers for the First Street Foundation, a consortium of academics. They calculated the higher figure after considering the effects of climate change and parts of the state not included in FEMA's flood insurance maps.

In Illinois, 451,700 properties are at risk of flood damage, or more than twice the number FEMA estimates.

The New York-based nonprofit research group found that over the next three decades, the number of homes and businesses at risk of flood damage in Missouri could increase by 1.8%, or 5,200 properties.

The actual number of properties at risk could be much higher if researchers better accounted for floodplain development and changes to rivers to accommodate navigation, said David Stokes, director of the Great Rivers Habitat Alliance.

“The real flood risk is higher than people are led to believe,” Stokes said. “This report is so focused on climate change that it’s understating the areas where flood risk is increasing for other reasons.”

The report found that St. Louis has more than 13,000 properties that are at risk of flood damage and that by 2050, another 500 properties could be vulnerable.

Researchers also calculated that a third of properties in the city of Valley Park could be at risk of flood damage. But city officials disagree. The report does not make any reference to the city’s large levee, which has kept residents dry during three recent major floods along the Meramec River, City Attorney Tim Engelmeyer said.

Property values in Valley Park have increased since the levee was built in 2005, Engelmeyer said. After a record-breaking flood damaged communities along the lower Meramec River in 2015, scientists and environmentalists suspected that the city’s levee was built too high and pushed floodwaters to neighboring communities.

A 2015 study from Washington University geologist Bob Criss concluded that federal agencies were underestimating the risk of major floods in the Midwest. The report found that FEMA and the U.S. Army Corps of Engineers were not adequately considering the effects of levees, dams and other manmade structures that can raise the risk of flood damage to downstream communities.

Our priority is you. Support coverage that’s reliable, trustworthy and more essential than ever. Donate today. 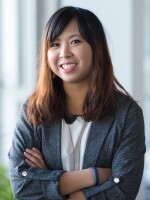 Eli Chen
Eli Chen is the science and environment reporter at St. Louis Public Radio. She comes to St. Louis after covering the eroding Delaware coast, bat-friendly wind turbine technology, mouse love songs and various science stories for Delaware Public Media/WDDE-FM. Before that, she corralled robots and citizen scientists for the World Science Festival in New York City and spent a brief stint booking guests for Science Friday’s live events in 2013. Eli grew up in the northwest suburbs of Chicago, where a mixture of teen angst, a love for Ray Bradbury novels and the growing awareness about climate change propelled her to become the science storyteller she is today. When not working, Eli enjoys a solid bike ride, collects classic disco, watches standup comedy and is often found cuddling other people’s dogs. She has a bachelor’s in environmental sustainability and creative writing at the University of Illinois Urbana-Champaign and has a master’s degree in journalism, with a focus on science reporting, from the City University of New York Graduate School of Journalism.
See stories by Eli Chen