City voters will also decide runoff aldermanic elections in 16 of the city’s 28 wards, whether again to retain the earnings tax and six ballot issues addressing the Metropolitan St. Louis Sewer District borrowing $500 million to improve wastewater service and changes to the utility’s charter. St. Louis County voters will also weigh in on MSD. St. Louis Comptroller Darlene Green is running unopposed on the ballot to retain her citywide office.

After an unprecedented expansion of absentee and mail-in voting options for the November 2020 general election, ways to vote this Tuesday have mostly returned to normal.

Here’s a breakdown of those rules and how you can still vote absentee: How To Vote In St. Louis’ April 6 Mayoral Election

The showdown between Treasurer Tishaura Jones and Alderwoman Cara Spencer, 20th Ward, is the big-ticket race this election. The candidates received the highest vote counts in the March primary and, under the rules of the new approval voting system, now face each other in a first-ever runoff election for the city’s top office. It’s the first time two women, both single mothers, will compete head-to-head to be St. Louis mayor.

The candidates last Thursday participated in a mayoral debate produced by St. Louis Public Radio, 5 On Your Side, Nine PBS and St. Louis American. Watch it here:

Jones and Spencer have run campaigns touting themselves as progressive candidates seeking to change how the city addresses violent crime, to invest in neighborhoods long neglected by developers and to spend an unprecedented $500 million infusion from the national American Rescue Plan. The race of the candidates — Jones is Black and Spencer is white — and how they plan to address racial inequities in St. Louis has been a key aspect of the runoff election.

In addition to appearing in last week’s debate, both candidates were interviewed on St. Louis Public Radio’s "Politically Speaking" podcast and "St. Louis on the Air." Candidates are listed in the order that they appear on the April ballot.

Spencer has represented the 20th Ward since 2015. Before entering politics, she did mathematical modeling for a local health care consulting company. This is Spencer’s first campaign for mayor. She lives in the Marine Villa neighborhood.


Tishaura Jones has served as the city’s treasurer since 2013. Prior to her election to that post, she spent four years in the Missouri House of Representatives. She has also worked in the health care and finance industries. This is her second bid for mayor. If she wins, she would become the city’s first Black mayor since Clarence Harmon was elected in 1997. Jones lives in the West End neighborhood.


Proposition E appears on the ballot every five years, asking voters to decide whether to retain the 1% earnings tax that applies to people who live or work in the city. The tax brings in about $240 million a year to the city’s general revenue fund and covers more than a third of the city’s budget. The money pays for public services like police, fire, streets, parks and trash collection.

Without that tax revenue, the city’s property and real estate taxes would “skyrocket,” said St. Louis Collector of Revenue Gregory F.X. Daly, who has contributed $50,000 to a campaign to educate voters on how the tax supporters city services.

If Prop E is voted down, that would trigger a plan to phase out the tax over the next decade.


Proposition Y asks voters to give the Metropolitan St. Louis Sewer District permission to borrow $500 million to improve its wastewater service. A 2012 settlement over Clean Water Act violations requires the utility to make billions of dollars' worth of upgrades to its system by 2039.

If Proposition Y is approved: MSD will sell bonds for a portion of those upgrades, keeping monthly rates lower in the near term: from the current $56.40 to $62.59 by 2024.

If Proposition Y fails: Rates will go up quicker to cover the cost. Rates would be $86.12 in 2024 and, according to a chart by MSD, could rise above $100 a month in 2035. But around 2036, the rates without borrowing would drop much faster than the rates with borrowing.

MSD is not taking a position on Proposition Y — it will have to do the work regardless.

Proposition 1: Removes a number of outdated references and titles and adds several protected classes, including sexual orientation and disability.

Proposition 3: Gives the commission that sets MSD’s rates more time to complete its work and changes the criteria the commission must consider when setting those rates.

Proposition 4: Boosts the compensation of members of the Board of Trustees to $600 a year. Trustees are currently paid $300 a year.

Proposition 5: Allows the same firm to sign a contract with MSD to do external audits for more than five years in a row, as long as the lead audit partner changes. As written, MSD’s charter requires the utility to select a new firm every five years, even if it may not be the lowest bidder. 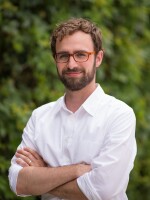 Brian Heffernan
Brian Heffernan is the digital editor and special projects editor at St. Louis Public Radio. Before coming to the newsroom in April 2018, Brian reported for a variety of publications including Al Jazeera America, St. Louis Magazine, Riverfront Times, San Francisco magazine and the Island Packet and Beaufort Gazette newspapers in South Carolina. He also worked in St. Louis' burgeoning startup and tech industry as a project manager and quality assurance specialist. A St. Louis native, Brian received both his master's and bachelor's degrees of the University of Missouri School of Journalism. When he's not plunked down in front of a computer screen, Brian enjoys traveling, exploring the outdoors, cooking and playing the very adult, sophisticated game of wiffle ball.
See stories by Brian Heffernan