Roads Continue to Close as Flooding Increases Across Missouri

More than 230 roads remain closed across the state of Missouri, including Route 63 near Vienna, between Rolla and Jefferson City. Today Interstate 55 closed in the southbound direction at noon between St. Louis and Jefferson counties according to information from MoDOT. The northbound lanes of I-55 are expected to close this evening. Travelers need to find alternate routes to travel east and west and now north and south in Missouri.

"Sunday we peaked over 385 closed roads statewide and presently we're at about 270," MoDOT Communications Director Linda Horn said. "The two biggest [closings] are I-44 and I-55 near St. Louis. They're causing tremendous problems, especially for cross state travelers, and we're still encouraging people to use the I-70 detour if you're trying to get across the state."

The closure of I-55 in St. Louis will make travel difficult between St. Louis and southeast Missouri. Route 51’s Chester Bridge over the Mississippi River in Perry County is expected to close Thursday at noon. Motorists should consider Interstate 57 at Sikeston across the Mississippi River into Illinois as a cross-state, north-south detour. Horn asks drivers to take precautions seriously.

“If you see a barricade on the road, don’t drive around it. We are having that problem in some areas where people want to go around the barricade because they want to get a little bit further down the road. Barricades are there for your safety. We don’t want you to drive into the flooded road. We’re trying to, especially where we’ve got the Interstates closed, we’ve got to funnel traffic off and try keep everybody as safe as possible,” Horn said.

Flash flooding is particularly dangerous at night or the early morning hours when motorists often cannot see they are driving into floodwaters until it’s too late.  Less than a foot of moving water is enough to push a vehicle. When the water recedes, MoDOT will inspect the pavement and bridges for safety before opening the roadways for public use. Most of the major routes are not expected to reopen until late in the week due to rising waters on the major rivers. 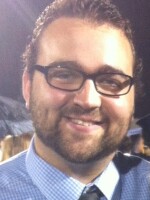 Garrett Giles
Garrett Giles is from Bartlesville, Oklahoma. He has experience with working with KCOU and KBIA where he has been a reporter, anchor, and show host for "B-Squared and G-Squared." He was a producer with KOMU for a brief period in 2016. He's currently working on a dual major (English and Journalism) at the University of Missouri. He's also written over twenty composition notebooks about his life. He serves with The Rock Campus Church, he is the oldest of five children, and he loves listening to Johnny Cash.
See stories by Garrett Giles