In this special edition of KBIA radio essays, University of Missouri magazine students share pivotal experiences that forced them to face loss and mortality, or in some cases, a surprising sense of their own invincibility.

The commentaries were edited and shepherded by MU Journalism Professor Berkley Hudson for his class on magazine writing. In the process, his student writers produced these pieces exploring a range experiences, from love and loss, to strength and mortality. Enjoy the ride.

You can hear a special edition of the commentaries, here:

Or listen to the individual commentaries, here:

Open skies, long roads, a van embarking on your own personal westward expansion … All can bring a feeling of Invincibility. But a spontaneous dine-and-dash moment on a road trip in Utah has left Will Jarvis wondering about … Karmic Consequences.

In Megan Schaltegger’s family, a troubling diagnosis led to an international trip for life-saving surgery, and a roster of long-distance phone calls. Megan looks back on those early morning calls to Japan, and finds gratitude for the time when that troubling distance finally closed.

Life as a military child is weird. You move around a lot, a parent goes to war and you’re forced to do a lot of growing up. Connor Lagore certainly was when his dad was deployed to Iraq in 2005, moving more than 4,000 miles away and leaving five kids under the age of 10 with their mother. But Connor found comfort in a surprising place - an piece of clothing … that helped ease the pain.

Hunting is a long-honored tradition - one that’s often passed from parents to children. But sometimes this past-time is more complicated than it seems. Anthony Ashley has a hunting story about a time when the only thing that could make him feel better was his dad feeling worse.

Adopting a pet can be one of life’s greatest joys - but losing a beloved pet is one of the hardest parts. Ashli Ellerman reflects on her time with her puppy, Harlie.

Amber Campbell saw college as a way to prove to herself and others that she could do something without her twin sister, Amanda. But she quickly realized that two is better than one.

It only takes a moment for a chance encounter to go from zero to a hundred — and then back to zero. Brooke Johnson made this discovery several years ago on an almost-fateful night when an unexpected visitor showed up at her apartment.

Michael Connolly’s mom didn’t understand why her son didn’t enjoy his first NFL game. He’d been a Jets fan his whole life and was getting the chance to see his favorite team play. Why wouldn’t that be fun?

There was nothing Keegan Pope’s father couldn’t do, at least in his child’s mind. But that all changed in adolescence, when he began the journey of becoming his own person. Now, two men are left searching for common ground. But maybe it’s more complicated than that. 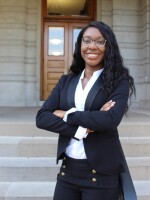 Lauren Brown
Lauren A. Brown is from the south suburbs of Chicago. She is currently an undergraduate in the Missouri School of Journalism studying broadcast journalism. She is a newscaster and reporter for KBIA. She loves doing feature stories because of the in depth interview process.
See stories by Lauren Brown