For one Missouri drag queen, moving to Columbia helped her expand the definition of family

It’s rare that a week goes by without a drag show – or two – in Columbia. It keeps the mid-Missouri drag queens and kings busy, but their support systems help them keep up with the pace.

Like most Midwestern drag queens, they have drag families, which work sort of like sororities, with drag moms and sisters that act as mentors and peers.

Dayton Gerren is a drag queen who lives here in Columbia, and like most drag queens, Dayton has two names and two moms. He’s Dayton in his day-to-day life, but she’s Artemis Grey when decked out in drag.

After moving from his hometown, Gerren chose to live smack in the middle of his two moms. His drag mom Regina La-Rae lives in Kansas City, Missouri, and his 'mom-mom' Missy Garren lives in Union, Missouri.

Gerren has attended and performed at drag shows for about three years – making his quasi-debut at a high school talent show in Union at age 17.

His mother Missy Gerren often drives up to Columbia to see Artemis perform.

“I'm so proud of him. I'm so proud of watching him be who he is and do what he wants to do. And being able to be a part of all that is amazing. And a part of his entire pride family is just fantastic. Like, they’re such a great, wonderful group of people. I love it,” Missy Gerren said.

In LGBTQIA+ communities, chosen families play vital roles in peoples’ lives. According to an Edith Cowan University study from 2016, anywhere between 15 and 51% of queer people experience rejection from parents and family for their identity.<br/>

At the start of her career, Artemis Grey didn’t have a drag family. Her first drag mom – YouTube – taught her how to do her makeup, and from there, she taught herself how to put together outfits and book shows.

Gerren met his future drag mom at the Warrensburg Pride Festival in 2021. They met several times after, getting to know each other on a personal and professional level.

“She kept watching my career develop and grow, and then we just sat down and had a conversation of ‘If you need a mentor, if you need a drag mom, my door is open,’” Gerren said. “And so I was like, 'Absolutely, I'm going to jump on that opportunity.’"

In LGBTQIA+ communities, chosen families play vital roles in peoples’ lives. According to an Edith Cowan University study from 2016, anywhere between 15 and 51% of queer people experience rejection from parents and family for their identity.

Gerren said he has a supportive family, but he still felt uncomfortable living in Union. People in his hometown were okay with him being gay – as long as he kept it to himself.

He said the more he used his voice and bloomed into Artemis Grey, the more ostracized he felt in Union.

“Instinctively, I was like, ‘Well, I'm going to run to the arms that are open, in the arms of people that are just very outwardly like, ‘We just want you to succeed,’” Gerren said. “Then I had to kind of realize that the love that was growing here [in Columbia] was beautiful. And I was happy that it was happening. And I was finding a chosen family, I was creating that for myself.”

After moving to Columbia, he didn't go back to Union for four months. He said that with time and distance, he realized he didn’t have to completely divorce himself from Union.

People in Columbia can look for Artemis at upcoming drag shows in Columbia both on the stage and in the crowd. And most likely, there will be two loud people there: her two biggest fans, both moms, cheering her on.

Briana Heaney contributed to the editing of this piece. 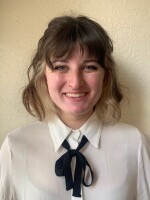 Abby Lee
Abby Lee is a student at the University of Missouri studying journalism and women’s and gender studies. She has interned with mxdwn Music and The Missouri Review.
See stories by Abby Lee
Related Content