Barb Bailey & Aaron Horrell: “Hopefully, we put something on the wall that speaks Missouri in a loud way. In a proud way."

Barb Bailey and Aaron Horrell spoke with the Missouri on Mic team at the State Historical Society’s Bicentennial event in August.

For the past several years, these two artists from the southeastern part of the state, shepherded the Missouri Bicentennial mural around the state, so that as many people as possible – regardless of any age or ability, had the chance to participate in painting the mural.

They spoke about what this process was like, why it’s important and what it means to them to be a Missourian.

Aaron Horrell: There were 15 panels, and each panel was 4 feet tall and six feet long. That would fit nicely into the back of my pick-up truck, so we could take one panel everywhere we went.

Barb Bailey: Well, at first, when we started, we had no idea what images would be on the mural. We discussed the St. Louis Arch, the state Capitol, and I told Aaron, I said “you know, the smaller communities are gonna feel left out.”

I said, “What if we do the state symbols?” and Aaron’s like, “yeah that’s perfect.”

"I'm from Missouri. I'm proud to be here. I love this part of the world. I've said several times in the past to people that Southeast Missouri is no art Mecca. I'm not going to be a wealthy man doing artwork in Southeast Missouri, you know, and that's okay."

This was a birthday present from the people in Missouri to the state of Missouri. So, Aaron and I, we had four little brushes. We put the paint on the brush, and we would show each person where to paint

Aaron: But the relevance of the Missouri Bicentennial is just that there was no pictures about – pictures of the Missouri State symbols or paintings, at least – so gosh, that meant that this is pretty awesome.

People can paint on on this knowing they will be part of actually putting that little piece of history up on the wall.

Missouri is in the middle of the country. Somebody decided to call us “flyover country” for a derogatory reason, but just show me that we need to be left out, chump.

You know what, I'm from Missouri. I'm proud to be here. I love this part of the world. I've said several times in the past to people that Southeast Missouri is no art Mecca. I'm not going to be a wealthy man doing artwork in Southeast Missouri, you know, and that's okay.

There has to be some kind of pride – Missouri state pride – in being able to do something no one else has ever done.

When Barb and I leave the project, sew hope that people here will be excited about this – especially the people who painted on it, but not only them – but the others also.

If you didn't get a chance to paint on it, that takes nothing away from you. You're still, you know, your heart bleeds for Missouri, and ours does too.

And hopefully, we put something on the wall that speaks Missouri in a loud way. In a proud way. In an awesome way that everybody can take pride in. 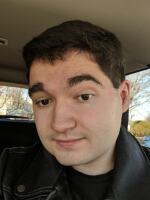