Lana Dicus: “It’s just a great thing to have so many relatives nearby that I can count on, depend on and socialize with.”

Lana Dicus spoke with us at the CoMo 200 celebration on the Fourth of July.

She's a history teacher – a 2007 Missouri Gilder Lehrman "Preserve America" History Teacher of the Year, in fact, and she spoke about the vastness of Missouri history – including some of her own family history – and about some common misconceptions about the state.

Lana Dicus: I grew up in California, Missouri, and I still live on the same farm that I grew up on.

The cool thing about it is my parents built that home where I live now and remodeled in 1959, and my Dad's Dad lived there before, but that house burned.

And the neat thing is – we built a shed, and when we did dirt work, we found an old boot pin with the initial “B,” which was my… my maiden name was Bollinger.

And I never got to meet my grandparents – they were gone before I was born, and so it's like a connection with what I think was my grandmother. I think of her being out there maybe gathering eggs.

It's pretty awesome. I'm the seventh in my family, and four of my five brothers raised their families in the area where I live.

So, like one time I was heading to school, and I had a flat tire that was before cell phones, and sure enough – one of my nephew's came along and fix my tires for me.

"But it just makes you appreciate what you have a little more when you know what people sacrificed for us to become the state that we are."

The other neat thing is some of my nieces do a lot of trail riding and they call me, and I get to go with them. So, I have a lot of relatives that include me in their family activities. It’s just a great thing to have so many relatives nearby that I can count on, depend on and socialize with.

As a teacher – studying the Louisiana Purchase and what Lewis and Clark what they did going across our state – it really makes you appreciate that we have the history that we do. That we were, you know, one of the… St. Genevieve is one of the oldest settlements west of the Mississippi

And, you know, having the two rivers run through our state – it just means a lot to me to know the history of the state and talk about the Osage Indians and how they lived and flourished in Missouri, and it makes me kind of sad, too – some of that history, as well.

But it just makes you appreciate what you have a little more when you know what people sacrificed for us to become the state that we are.

So, as most people know, we had a Netflix show called “Ozark,” and it makes us all look like we're a bunch of hillbillies. That is so unfair.

You know, we have – when I taught Missouri history, we have a lot of famous Missourians. So no, we're not all a bunch of hillbillies down here.

My dad used to say, you know, “people die lying in bed, so get up and work.” We just… we're a state of people that have good worth work ethics.

I hope that we state that we are continue to be known for hard-working people, but that also we can step out and shoot for other goals because we're not such a crowded state that there's not room for new business ventures.

There's something for everybody in Missouri. 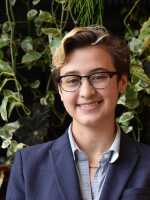