When senators return at noon Tuesday, they’ll decide whether to pass a House bill that would institute more restrictions than what the Senate originally went for a few weeks ago.

Republicans say that the bill sponsored by Koenig, a Manchester Republican, will help make abortion clinics safer for women. But Democratic lawmakers argue it’s meant to restrict access to abortion.

It’s been a month since Missouri lawmakers discussed abortion restrictions in the second special session of the summer. They return Monday with the hopes of swiftly approving a revised bill and getting back to their day jobs and vacations. 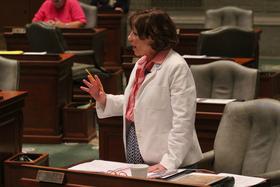 Sen. Andrew Koenig, a Republican from Manchester, is the chief sponsor of the bill, which the House revised on June 20. He said he’s confident his party has the votes to kill any filibuster by Democrats (Senate GOP has a 24-9 edge in sheer numbers) and approve the measure “as is.”

But outnumbered Democrats don’t like the House changes, which strengthened regulations for clinics and apparently violated an agreement between the two parties.

“There were commitments made, and as far as my caucus is concerned, it’s a deal-breaker,’’ Senate Democratic leader Gina Walsh of Bellefontaine Neighbors said.

The bill at issue would do the following if passed:

Even though Democrats are at a disadvantage overall in the GOP-majority legislature, and especially in the Senate, Walsh said her party will be less cooperative in the 2018 regular session should Republicans cut off any debate.

In fact, the current special session is happening in part because Democrats blocked legislation — including several anti-abortion bills — in the final weeks of the regular session, which ended May 12.

“I actually think that the House has done a very good job,” he said, adding that his main aim has been to “protect pregnancy care centers here in the state of Missouri.”

The Senate convenes at 4 p.m. Monday.

The Missouri ruling was among the reasons why abortion opponents had pressed Greitens to call the second special session. Friday’s ruling “reinforces their passion that this legislation needs to be something to get done,’’ Kehoe said.

Taxpayers have paid close $140,000, so far, for both special sessions; the first came in late May and dealt with proposed aluminum-smelter and steel plants in southeast Missouri.

Greitens, who makes about $133,000 a year, has not ruled out holding another one, though he hasn’t detailed what other topics could be considered.

When it goes into its second special session Monday, the Missouri General Assembly will focus on a frequent — and arguably, favorite — target: local control.

On issues ranging from gun rights to anti-discrimination regulations, Republican leaders have made it clear that they believe there should be a consistent law across Missouri. That’s why since 2007, they’ve approved bills to bar communities from enacting stricter gun laws, overturned Kansas City’s higher minimum wage (there’s an action pending against St. Louis’ higher wage, too), and tossed out Columbia’s plastic bag ban.