Officials plunged ceremonial shovels into the dirt at the future site of Live! by Loews at Ballpark Village on Monday.

The $65 million hotel, at the corner of Clark and 8th streets, is part of the $260-million, second phase of the development. The hotel is a part of the living space that Cardinals President Bill DeWitt III said will put the “village” in Ballpark Village.

“What a village means to me is foot traffic; people that live and work and play in an area” DeWitt said. The 216-room hotel accompanies a 29-story luxury apartment building as one of the two residential spaces in the development.

Progress on Ballpark Village has began haltingly after the plan was first floated in the early 2000s. The eventual groundbreaking took place in 2013 and phase one, which focused on food and entertainment, opened to the public in 2014. Phase two, which officially kicked off last December, also includes an office tower and an additional 74,000 square feet of retail and entertainment spaces.

Baltimore-based Cordish Companies and New York-based Loews Hotels & Co. partnered with the St. Louis Cardinals for this project, which is loosely modeled after a similar Live! hotel in Arlington, Texas, near to the Texas Rangers and Dallas Cowboys’ stadiums. 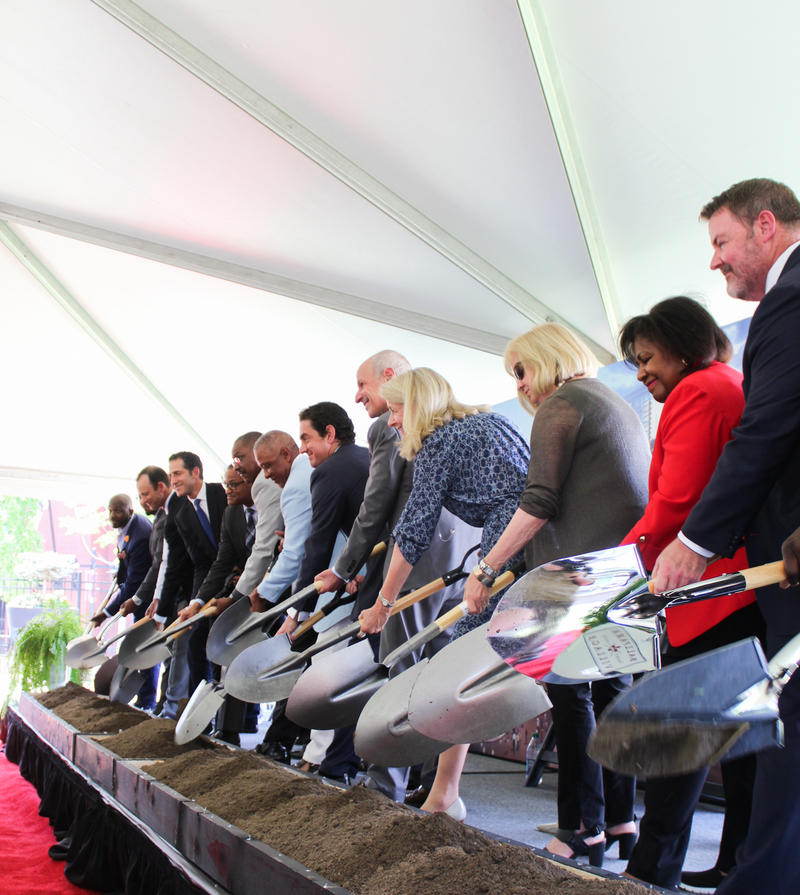 This is the first time Loews Hotels & Co. has entered the St. Louis market. “We’re thrilled to be part of what has been a generational franchise that really gets this part of the country excited every time that ball hits the bat,” said Chairman and CEO Jonathan Tisch.

St. Louis Mayor Lyda Krewson called the project a “major milestone” for downtown St. Louis that will bring 1,500 construction jobs and 1,000 additional permanent jobs during the second phase. Krewson said the hotel “ will be an incredible new amenity for Ballpark Village and will create a special hospitality experience for downtown.”

Kitty Ratcliffe, president of Explore St. Louis, added the hotel would be a great new venue for some of St. Louis’ 26 million annual visitors. “They come for business purposes; they come for leisure purposes and they’re going to find in February 2020 that they have a whole new product to experience here,” Ratcliffe said.

The hotel, designed by HKS Architect Hospitality Studio, will feature a 6-story mural that will show the footprints of the Busch Memorial Stadium and the current Busch Stadium. The hotel will also include a several indoor and outdoor bars.