On Fifth Night Of Protests, Calm Settles Over Ferguson | KBIA

On Fifth Night Of Protests, Calm Settles Over Ferguson

The sound of honking horns became a symbol Thursday night along West Florissant Avenue in Ferguson.

It was the first night since Saturday -- the day Michael Brown was shot to death by a Ferguson police officer -- that traffic had been allowed to move freely along one of the main commercial strips in Ferguson. There was no line of police in riot gear and armored vehicles facing off against a crowd. The few officers spotted were in regular uniforms. The atmosphere felt more like a party than a protest. 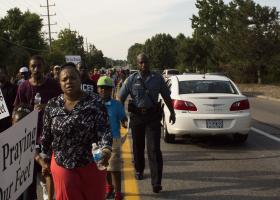 The decision by Gov. Jay Nixon to place the Missouri State Highway Patrol in command in Ferguson appeared to have paid off.

Nixon put Capt. Ron Johnson, a Ferguson native and African American, in charge on Thursday afternoon and said authorities would be taking a softer tone. About two hours later, Johnson was marching with a group of pastors and black youth.

"I am a black man with black sons," Johnson told the marchers before they set off for a looted QuikTrip about a half mile away that had become a gathering point for protestors. He said his own son had been harassed by police.

At the QuikTrip, Johnson laid out his expectations for the protestors.

"You can stay out here all night," he said. "The only thing that I ask is that you pull back a little bit so that our family members, and our friends can travel up and down West Florissant. They can come by, yell out the window, blow their horn and give you support, but you've got to move back on the sidewalk."; 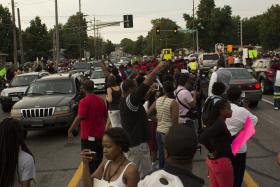 For the most part, everyone complied. Protestors did not always stay on the sidewalk, but they remained out of traffic, which cruised slowly for most of the night. People hung out of cars, and the horn blowing was constant. The Port-a-Potties promised by the Ferguson police saw heavy use.

For their part, the police remained mostly out of sight, only responding to tend to a young woman who had fallen out of a car. Later on, Johnson and St. Louis County police chief Jon Belmar walked a few blocks, with Johnson stopping to hug protestors and compliment them on their motorcycles. A group driving a mini train offered him water.

"This is my community, these are my friends, this is my family, and I’m making new friends tonight," Johnson said. "We're all a part of this together."

Dante Kelly spotted Johnson in the crowd and yelled out a message of thanks.

"Our voices are being heard tonight," he said. "We’re not being oppressed, we’re not being harmed out here. We can stand out here and protest in peace like we were doing without being harassed and harmed by the police."

Focus On The Youth

After the march led by the Clergy Coalition, many of the young participants headed up to Greater St. Mark Family Church to air their concerns in the wake of the fatal shooting of Michael Brown. As people filed out of the forum and walked toward the epicenter of what have been at times violent protests, Aloni Benson, 24, hoped a more relaxed stance by the police would ease tensions.

"We’ve been misrepresented,” Benson said. “Not every youth is out here breaking into stores and stealing stuff. This was a time for the troubled kids to indulge in things and become opportunists. Everybody’s not doing that. We’re doing a peaceful protest and we’re being positive."

Khalia Grant, 23, said the event was positive but added that not everyone in her age bracket feels comfortable in a church.

“I think it would be bigger if we had something like this in the community where they’re able to express how they feel,” Grant said.

She regrets that violence and looting sprung up in the wake of Brown’s shooting. At the same time, Grant said it brought lingering frustrations among African-American community members to the forefront.

“Now that negative thing did happen, we need to turn it into a positive real quick and turn it around,” Grant said.

She’s heading back for her senior year in college next week at the University of Central Missouri and plans to bring a sense of community activism with her.

For Michael Brown, Wheels Of Justice May Turn Slowly

St. Louis Board of Alderman President Lewis Reed has an idea about what’s driving the frustration about Michael Brown’s death.

Michael Brown’s death at the hands of a Ferguson police officer placed St. Louis in an international spotlight. In the past week, the region experienced a torrent of anger, unrest, violence and sorrow.

The 18-year-old’s death positioned the world’s camera lens on riveting images of looting, protesting and overwhelming force from law enforcement. Derrick Robinson, the bishop at Kingdom Destiny Fellowship International, contends there’s a longstanding tension within the soul of St. Louis.

This Is Ferguson: Residents And Business Owners Tell Us About Their City

For 120 years, Ferguson, Mo. -- currently home to 21,203 people -- has been a little city that has grown in good times and evolved in hard times, with little attention from folks outside the St. Louis region.

That changed in a flash of gunfire last Saturday when a Ferguson police officer shot and killed Michael Brown, an African-American 18-year-old who was unarmed.