Robert G. Lowery Sr., the former police chief and mayor of Florissant, died Monday night at the age of 79.

He started his policing career at the age of 16 as a call-box operator for the St. Louis Metropolitan Police Department. He began his work in Florissant in 1961, when he served as a patrolman for the city’s police department. He eventually became a detective and was instrumental in forming the city’s first detective bureau in 1963.

“He had made such good inroads with people from a public-relations standpoint during his police career,” said Florissant Mayor Tom Schneider.

Lowery transitioned to become the commander of the Major Case Squad of Greater St. Louis. The organization pulls investigators and resources from various municipalities to work on high-profile crimes. Lowery left the squad in 1979; he served as the Florissant police chief until 2000.

“When he became mayor, he was very good at getting people to back Florissant,” Schneider said. “So he was able to get some areas annexed into the city.” 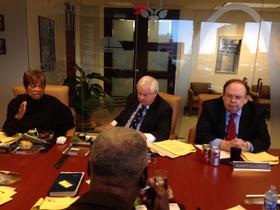 Lowery’s tenure was categorized as a “strong-mayor” form of government. Several critics accused him of holding too much power within the city. The complaints resulted in a 2010 audit of Lowery’s administration by Auditor Susan Montee. The audit did not find any significant financial problems, but Lowery was criticized for not providing logs of when his city-leased car was used for personal use and failing to provide documentation for a handful of city council meetings between 2008 and 2010.

Schneider said Lowery fell Sunday night at home. He hit his head and never regained consciousness. He is survived by his wife Carol, five children and eight grandchildren. His son Timothy Lowery is the current Florissant police chief.