Granite City is making steel again, but many are still struggling this holiday season | KBIA

Granite City is making steel again, but many are still struggling this holiday season

Salvation Army bell-ringer David Burks was making a joyful noise in front of the Granite City Walmart on a recent Friday morning. He greeted everyone who passed his red kettle, whether they dropped in pennies or a folded dollar bill or hurried by without a glance.

“You have a good day now. Thank you, and God bless you.”

The fundraising goal for the Granite City Salvation Army is $88,000 this Christmas season, and it will take thousands of drops in the buckets to get there. The Salvation Army says its trademark red kettle campaign is as important as ever because many have been left behind by the nation's rebounding economy.

The good news in Granite City — U.S. Steel’s decision to restart its landmark plant — thrust the community of 29,000 into the national spotlight last summer. The company put about 1,500 people to work and gave the credit to President Donald Trump’s steel tariffs. He held a rally at the plant in July.

But the economic boost from the plant’s reopening has yet to trickle down to many in the city who are struggling financially, say leaders of charitable groups that aid the city’s poor.

The number of people seeking assistance remains steady, said Lt. Christina Tamayo, who runs the Salvation Army's center in Granite City. Her food pantry, for example, has provided about 3,800 grocery orders so far this year, a slight increase from the past two years. Among those helped are families trying to make ends meet on minimum-wage incomes.

The Great Recession was devastating for people already in poverty, and it pushed others into poverty for the first time, Tamayo said.

“Lots of shifting sand is still happening within people's lives,’’ she said. “It's not stable yet. And I don't anticipate it being stable anytime soon.’’

Tamayo, 34, served in Kirksville, Missouri, before being assigned to Granite City in June.

Although she is still new to the area, Tamayo said she was struck by the resilience of the steelworkers who pushed to get their plant reopened. She’s discovered that many of the people who support the Salvation Army have been through hard times at some point in their lives.

“The people we’ve helped are the first ones to give in the bucket,’’ she said. “Pocket change. A dollar. Anything they have. Because they see the effect that it’s had on them, and they want to help somebody else.” 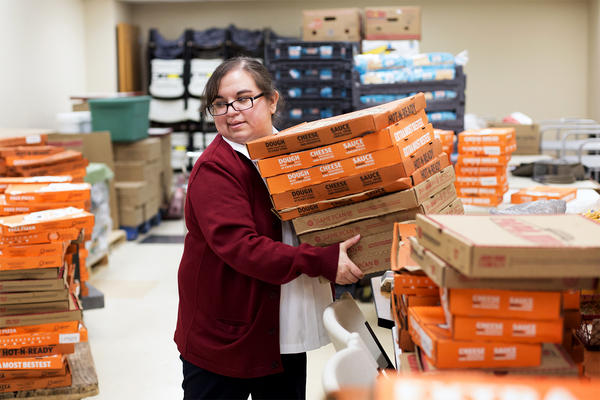 The Great Recession gut-punched Granite City. Unemployment in the steel town soared to 15.7 percent in June 2009. That was the same month the recession officially ended, according to economists.

Ten years later, the city’s jobs numbers are positive. The unemployment rate was 4.8 percent in October, which is below pre-recession levels. The national rate is 3.7 percent.

Still, about 17 percent of Granite City residents live below the poverty level, according to the U.S. Census Bureau. Poverty thresholds are set annually by the U.S. Department of Health and Human Services. For a family of four with two children, for example, the poverty level is $25,100. One-fourth of the city’s children live in poverty.

In recent weeks, the city’s retail sector has taken hits. The Granite City Shop ‘n Save was one of 16 in the region shuttered by the grocery chain in November. The Lowe’s store is going out of business.

Everyone agrees that the reopening of the U.S. Steel plant was good for the region, but it’s too early to know what lasting impact it will have, said Timothy Sullivan, who teaches economics at Southern Illinois University-Edwardsville.

The recovery from the Great Recession was uneven in the metro-east, just as it was throughout the nation, said Sullivan, who heads the Office of Regional Economic Analysis.

“There are parts of Madison County, certainly in Edwardsville and Glen Carbon, where we have a lot of construction and things are growing fairly quickly,’’ he said. “There are other pockets that are obviously growing more slowly — and some that are struggling.” 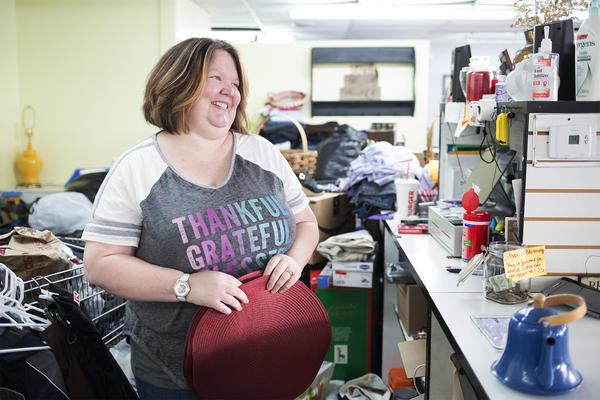 “We just want to help people”

The Blessed Threads Thrift Shop and Resource Center in Granite City is stocked with good intentions —  clothing, home goods and children’s toys donated to help the needy. People come by the store every day to drop off more donations — cardboard boxes and plastic trash bags stuffed with hope. Most items in the store are priced at just a dollar or two.

It’s a grass-roots effort — people stepping up to help their neighbors.

“We just want to help people,’’ said the store’s founder Christa Funderburk. “They just come in, and we help them.”

Ten years after the Great Recession, the people Funderburk helps haven't shared in the nation's economic recovery.  Some are homeless. Some are elderly people who can't afford their medicine. Some are single moms and young families struggling to make ends meet.

“If you work 40 hours at minimum wage — I don't care how many hours you work — it takes more than that to take care of a family,’’ she said. “And, yes, you may get public assistance, but that only goes so far.’’

The reopening of the steel mill was wonderful and brought a lot of attention to the community, but it was not a cure-all, Funderburk said. And, she added, the steelworkers who work at the plant don’t all live in Granite City.

“And so the revenue dollars that come from the mill opening don't necessarily get spent here in Granite City,’’ she said. “They go wherever those people live.”

Blessed Threads began in a small room at the Rivers of Life Community Church in Granite City but quickly outgrew the space. Funderburk opened the shop a year ago. Sales are enough to pay the rent and two employees. She volunteers her time.

The concept works because of community support and her dedicated staff, Funderburk said. 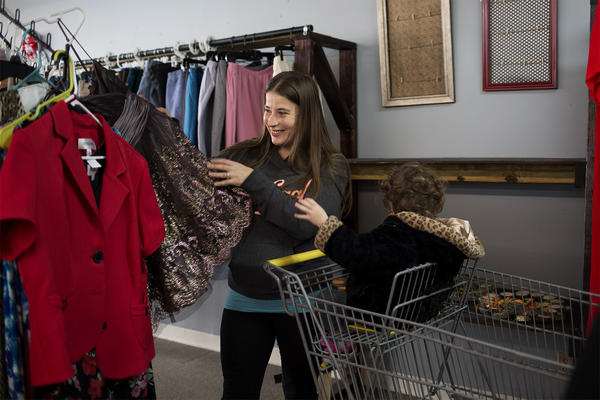 On a recent morning, Angie Kunst of Granite City brought in children’s clothing and toys.

“We like to support the community, and we know she does a lot of good things for the people here in town in need,” Kunst said. “And we want to help her in her journey with that.’’

Funderburk, 38, left her job in health care to start Blessed Threads. She grew up in Granite City and knows what it's like to need help.

“I grew up in one of those families where my parents did the absolute best they could,’’ she said. “But they struggled, and they had five kids. We would go places to get help.”

She also remembers her family being treated disrespectfully by some of the people who were supposed to be helping them. So, everyone who walks through the door at Blessed Threads gets a friendly greeting from Funderburk or her helpers.

“How you doing, Love?” Funderburk will call out. She also welcomes her "homeless friends" to stop by the shop to warm up in the winter or cool off in the summer. She stocks the bathroom with washcloths and toiletries so they have a place to freshen up.

Blessed Threads is a safe place where people who need a helping hand will find one — with no red tape, she said. That’s why she relies on donations, instead of applying for grants.

“If I had to get grants and go by the rules and regulations that come with those grants I would be turning the majority of my people away,’’ she said. "And that’s just not something that I can do.”

Funderburk is collecting donations of money and new and "pre-loved" toys to make Christmas gift baskets for families who are struggling this holiday season. She has a list of more than 150 children, so far.

"A lot of folks are asking for necessities this year, like winter clothing — the things they really need,'' she said. 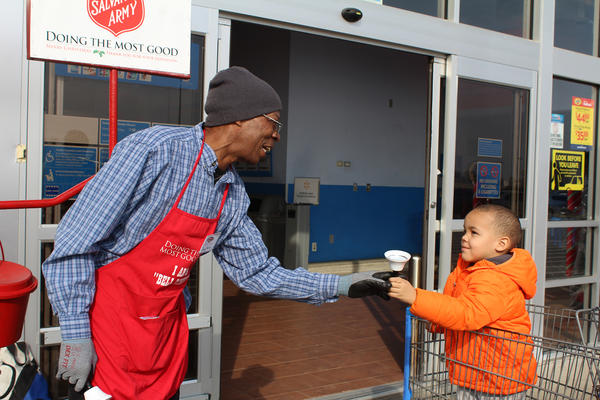 “They lifted my spirit up”

The Salvation Army's Granite City community center is about a mile from the steel mill. It serves residents of southwest Madison County.  The annual red kettle drive is its major fundraiser of the year, Tamayo said.

“If we do not meet our goal, we have to cut back,’’ she said. “This money is not just for Christmas. It gets us through the next year.’’

Outside Walmart, Burks, 60, was cheerfully doing his part, waving his arms with gusto, a bell in each hand.

“Tis the season to be jolly … It’s Christmas time in Granite City!”

Burks took off six weeks from his job in a warehouse to ring the bell. The Salvation Army welcomes volunteers but also hires bell-ringers at minimum wage.

“I take a little pay cut, but it’s worth it,’’ he said. “When I was down and couldn’t get no help from anybody else, they was always there for me. They lifted my spirit up.”

Denise Shepherd stopped her shopping cart at the red kettle and dropped in a donation.

“It’s important for us to take care of our city,’’ she said. “Even though there might be a lot of work that’s coming our way, with the steel mill up and running, we’ve got stores that are closing. So, there are still a lot of families that need our help.”

People in Granite City support one another, added Shepherd, whose husband pastors a church in town.

“There’s a real sense of community here,’’ she said. “We all don’t have a lot of stuff. But we have enough that we can share a little. And that’s what I think we do.’’