In Overland Park, Hearts Go Out To Pittsburgh And Religious Leaders Urge Action

The parking lot filled fast at Kehilath Israel Synagogue. More than 1,300 people turned out Monday night for a diverse vigil in Overland Park supporting the Jewish community in Pittsburgh.

“Our hearts go out to the people in Pittsburgh, because we know what that’s like,” said Janee Hanzlick on her way into the building.

The mass shooting at a Pittsburgh synagogue on Saturday, during Sabbath services by an individual shouting anti-Semitic slurs, left 11 dead and six wounded — and reverberated particularly strongly in Kansas City, which experienced its own paroxysm of anti-Semitic violence in 2014.

That's when a shooter shot and killed three people at the Jewish Community Center and Village Shalom in Overland Park. None of the victims happened to be Jewish, but the shooter said he was looking for Jews to kill.

At Kehilath Israel Synagogue on Monday night, Christians, Muslims and Sikhs joined with Jewish Kansas Citians from temples across the metro area. Many wore stickers reading “No place for hate," and speakers like Rev. Rodney Williams, president of the Kansas City chapter of the NAACP, drew standing ovations, lamenting a chilling rise in bigotry and urging listeners to fight it at the ballot box.

“We must come together and organize, and stand shoulder to shoulder and vote like never before,” thundered Williams. 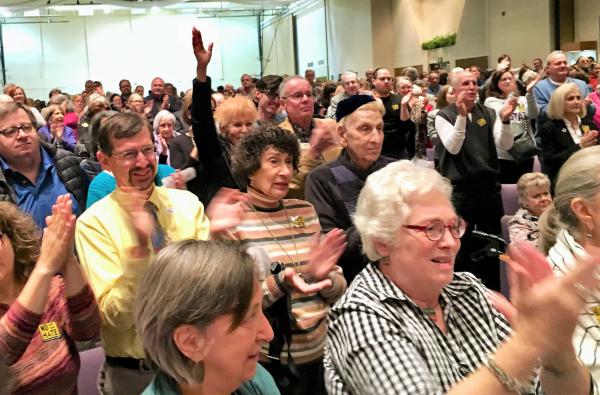 Marvin Szneler, who recently retired as director of the Jewish Community Relations Bureau of Kansas City, said Saturday's shooting shook him even more powerfully than the shootings four years ago in Overland Park.

“Despite Jews being targeted but not murdered in the parking lot in which I worked and the nursing home in which my mother lived, it didn't hit home,” Szneler said earlier on Monday, during KCUR’s Central Standard. “It has hit home and I am afraid today.”

Mark Levin, the founding rabbi of Congregation Beth Torah in Overland Park, told Central Standard host Gina Kaufmann that the murders four years ago were “very much on people’s minds” after Saturday's shootings.

“It simply brings home, once again, this terrible fear that when you're in the act of doing something religious, you could be murdered by an extremist,” Levin said.

Both Levin and Szneler said the murder rampage in Pittsburgh was the inevitable byproduct of a toxic political environment in which hateful speech has been tolerated and even endorsed by political leaders.

“Now we have politicians who are, what should one say, making, normalizing, rationalizing, identifying other groups as the enemy,” Levin said.

Both men said it was important that people speak up and call out hateful conduct.

“In the face of evil, politeness is a luxury,” Levin said. “We must get beyond somebody saying something bigoted and saying, ‘Well, he's my neighbor.’ … No! That is an unacceptable thought.”

At Monday's vigil at Kehilath Israel Synagogue, area rabbis lit candles for each of the 11 people murdered at Tree of Life Synagogue in Pittsburgh.

Speakers also invited people of all faiths to attend services at synagogues this Friday night and Saturday for what they’re calling a “National Solidarity Shabbat” to help strengthen coalitions between religious groups.

Dan Margolies is a senior reporter and editor at KCUR. You can reach him on Twitter @DanMargolies.

Frank Morris is an NPR correspondent and senior editor based at KCUR in Kansas City, Missouri. Follow him on Twitter @FrankNewsman.