Kansas Could Cut Back On Felonies For Property Crimes | KBIA

Kansas Could Cut Back On Felonies For Property Crimes

Kansas could end up handing out fewer felonies — and more misdemeanors —  for certain property crimes.

That could mean sending fewer people to state prison, though some might end up in county jail instead.

Until 2016, stealing $1,000 worth of property was the threshold between misdemeanor and felony theft. Then Kansas raised the dividing line to $1,500.

A criminal justice commission looking at prison overcrowding in the state voted this week to ask the Legislature to do the same for a host of other crimes. They include criminal property damage, stealing mislaid property, counterfeiting and Medicaid fraud.

As of August, both the male and female prison populations were above capacity. The proposed changes would free up an estimated four beds a year and spare people a black mark that can make finding work difficult for the rest of their lives, says Scott Schultz, executive director of the Kansas Sentencing Commission.

It can be harder to find employment with a felony record because many employers require disclosure of felonies.

Getting a misdemeanor instead of a felony means potential time in county jail, but not state prison. That doesn’t necessarily translate to less incarceration time. In some cases, people could spend more time behind bars in a county jail than they would have in a state prison.

The Kansas Sentencing Commission is making its case for the change based on research from the Pew Charitable Trusts.

Pew found dozens of states have made similar changes since 2001. That didn’t lead to more crime. Rather, property crime and larceny rates fell in states that changed their thresholds. It dropped slightly more in states that didn't change, but the difference was statistically insignificant.

Kansas has raised its threshold for felony theft before — in 2004 — and related crime continued to decline, Pew says. 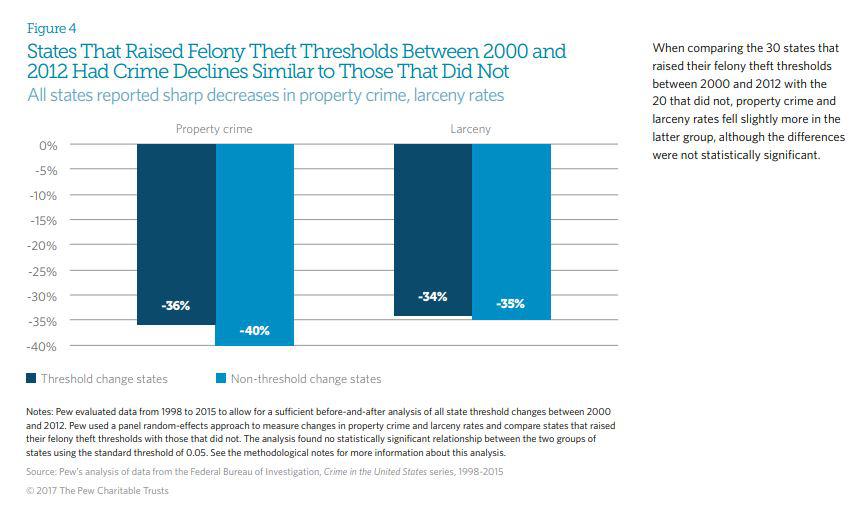 Celia Llopis-Jepsen is a reporter for the Kansas News Service, a collaboration of KCUR, Kansas Public Radio, KMUW and High Plains Public Radio covering health, education and politics. You can reach her on Twitter @Celia_LJ.