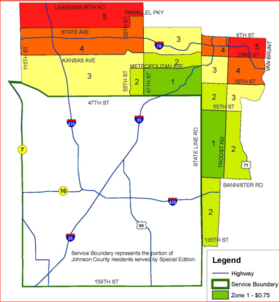 Previously, the service was limited to residents living within the boundaries of 47th and 159th Streets and K-7 Highway and State Line Road.

"We’ve grown tremendously to the south and southwest," Powers says. "The removal of these boundaries means any resident in Johson County can now utilize paratransit, which is huge for folks who are older or are living with a disability."

The more limited boundaries of the paratransit service had been in place for 40 years, Powers says.

The overall population in Johnson County grew 8.6 percent between April 2010 and July 2017, according to the U.S. Census.

Residents eligible for paratransit include those 65 or older, those with a verifiable disability and low-income residents who qualify for a reduced fare.

Paratransit rides can be scheduled up to 7 days in advance and no later than two days before the trip.

The paratransit service provided almost 39,000 rides in the first half of 2018, according to the KCATA.