The Spencer Museum of Art and The Commons at the University of Kansas in Lawrence released a joint statement Friday supporting freedom of expression after a piece of art depicting the U.S. flag with black marks on it was moved inside the museum.

As KCUR reported on Wednesday, due to an outcry from elected officials and political candidates, KU officials asked the Spencer Museum to take down "Untitled (Flag 2)" by Josephine Meckseper. The work was moved from a flagpole on campus in front of The Commons at Spooner Hall, and is now on display inside the museum.

On Thursday, Kansas Governor Jeff Colyer and Secretary of State Kris Kobach, the two leading Republicans in the Kansas governor's race, called for its complete removal from campus.

The Spencer Museum and The Commons on Friday issued the statement in support of "freedom of expression in academia and the contributions it brings to society. We remain committed to engaged and inclusive dialogue with our communities." 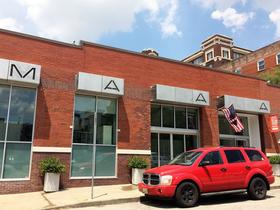 Exploring the American flag in contemporary art is not new.

Artists from Jasper Johns to Barbara Kruger to AA Bronson have re-imagined it; Claes Oldenburg created a flag as a chunky sculpture, Kate Ericson and Mel Ziegler crafted one with jars of baby food, and Patrick Martinez in neon.

This exhibit is part of the Pledges of Allegiance series, which launched in November 2017, organized by the New York-based nonprofit Creative Time.

Sixteen artists created flags "representing current issues of importance, to be exhibited and discussed at public and private institutions nationwide." The Spencer Museum and the Commons have displayed 11 of the 16 works, and Meckseper's is the final flag in the series.

According to the museum, support for the project comes from private funds.

Meckseper's artwork remains on view in 13 locations, including outside the Mid-America Arts Alliance's building in the Crossroads Arts District in Kansas City, Missouri — where, so far, there's been no controversy.

The M-AAA describes Meckseper's work as "a collage of an American flag and fragments of an earlier work of hers entitled 'Goodbye to Language.' A black-dripped color field resembles a United States map, divided in two. The black and white sock takes on a more symbolic meaning of polarization, but also stands for creating a dialogue."

The Spencer Museum, The Commons, and other university departments are working on a series of programs in the next few weeks to continue this dialogue and "explore the issues and the response" raised by the work.

On Friday, Joey Orr, who works as a curator for research at the museum, wrote on Instagram: "Come see me in the morning at the Spencer Museum and let's visit and discuss."

Laura Spencer is an arts reporter at KCUR 89.3. You can reach her on Twitter at @lauraspencer.