U.S. Sen. Claire McCaskill, D-Mo., said Wednesday that she will vote “no’’ on the nomination of Judge Brett Kavanaugh to the Supreme Court.

McCaskill’s decision is not unexpected. She has signaled for weeks that she had concerns about the judge’s decisions on various issues.

McCaskill joins most other Senate Democrats who already have announced their opposition to his confirmation. Progressive groups have been pressuring her for weeks to follow suit.

McCaskill said in a statement late Wednesday that she is particularly disturbed by what she sees as Kavanaugh’s apparent support for allowing campaign donors to keep their contributions secret. That practice is known as “dark money.” 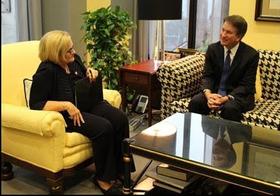 “He has revealed his bias against limits on campaign donations which places him completely out of the mainstream of this nation,” McCaskill wrote. She blasted “the avalanche of dark, anonymous money that is crushing our democracy.”

Watchdog groups say that her contest against the GOP nominee, Missouri Attorney General Josh Hawley, has attracted more dark money than any other Senate race in the country. McCaskill asserted that “a Russian company that has been indicted for election interference is currently using Judge Kavanaugh’s opinion to argue for their innocence."

Hawley is a staunch supporter of Kavanaugh. In a statement late Wednesday, he said he also wasn't surprised by McCaskill's decision: "She has sided with Chuck Schumer every single time – for liberals and against Missouri. Senator McCaskill has forgotten where she’s from and become just another Washington liberal."

McCaskill  emphasized that her opposition was not based on an accusation that Kavanaugh attempted to assault a female student while he was in high school. That issue has ignited an uproar in Washington. Kavanaugh denies the accusation, and President Donald Trump is sticking by him.

McCaskill called the allegations “troubling,’’ adding that she favored “a thorough and fair examination by the Senate Judiciary Committee.”

At the moment, it’s unclear if or when the panel will hold a hearing. The alleged victim, college professor Christine Blasey Ford, has said that she wants the FBI to investigate the matter before she testifies. Republican Senate leaders oppose any FBI involvement.

Hawley contended Wednesday on a national radio show that Democrats were obstructing Kavanaugh’s nomination, and called for a swift vote.