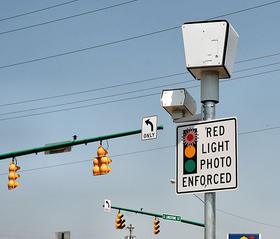 A new bill introduced to the Missouri General Assembly seeks to give voters the choice to ban the use and enforcement of red light and speeding cameras statewide.

Earlier this month, the Missouri Supreme Court heard three cases testing the legality of traffic cameras. But Mo. Rep. Paul Curtman (R) of the 109th District wants to give the final say to voters.

Curtman says some cities in his own district, which includes parts of Franklin, St. Louis and Jefferson Counties, have banned the cameras out of concern for public safety and trust.

"At the end of the day, a lot of it’s just really about municipalities generating revenue in a way that actually builds barriers of mistrust between the people and their government," Curtman said. "The people of Missouri are ready to vote on this themselves and bring an end to the issue altogether."

Curtman believes that if his bill is put on the ballot, Missourians will vote to ban the cameras. The bill he’s filed doesn’t call for a constitutional amendment but would change state traffic regulation statutes.

"Shall Missouri law be amended to:

Prohibit political subdivisions and state agencies from using automated traffic enforcement systems to establish evidence of noncompliance with traffic signals, speeds, or other laws or ordinances on public streets, roads or highways within this state, or to impose or collect fines, fees, or penalties for noncompliance?"