Missouri Gov. Jay Nixon called for a temporary halt to what’s known as the economic “border war” between Kansas and Missouri Tuesday, in an address to the Greater Kansas City Area Chamber of Commerce. 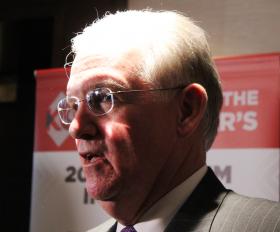 Both states have a history of offering incentives to draw companies across state line. Nixon wants a temporary moratorium for the Kansas City metro area.

Nixon said his administration and that of Kansas Gov. Sam Brownback have been negotiating the issue.

When asked the last time he had talked with  Brownback, Nixon hesitated before saying it had been “several short weeks.”

Nixon said offers to draw companies from one side to another have not created new jobs, hampering the ability of the region to compete globally.

"We need all the dollars of our low-tax states to focus on creating an economy of the future right here,” Nixon said.

The border war is unique to the region, said Nixon. He proposed Kansas and Missouri legislatures make the moratorium permanent, to mutual benefit.

Leaders of the Missouri House and Senate were quick to criticize the Governor’s proposal.

House Speaker Tim Jones said in a prepared statement that Nixon has lost Missouri more than 30,000 jobs during his time in office.

“He has done nothing to turn the tide,” said Jones.

A new political group is launching a campaign to persuade legislators to override the governor's veto of a bill that would phase in various income tax reductions. Political activist Rex Sinquefield has contributed $1.3 million to a business coalition that supports a cut in income taxes.

Missouri House members have approved a trio of measures that would reduce taxes for some businesses.