The Missouri House has passed two pieces of legislation to require voters to show government-approved photo identification at the polls.

The first, House Joint Resolution 1, is a proposed constitutional amendment to allow for a photo ID law to be passed by the legislature. It would also have to be passed by Missouri voters.  The second, House Bill 30, would be the implementing bill placing photo ID requirements in state law. 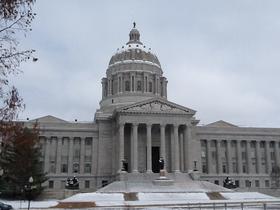 House Democrats and black caucus members sharply criticized the proposal on Wednesday, calling it racist and saying it would amount to a poll tax on people without a photo ID. Shamed Dogan of Ballwin, the only black Republican in the Missouri legislature, strongly disagreed during today's final debate.

"There's no truth to these allegations," Dogan said, "to say that other members of this body are trying to pass legislation for some sort of insidious reasons, racially discriminatory reasons, it's out of line (and) it's really uncalled for."

But House Democrats maintained their position that the photo ID bills would disenfranchise African Americans, along with the poor and disabled.

"This actually would affect real people," said state Rep. Stacey Newman, D-Richmond Heights.  "There has been no concern on (the House) floor of the actual people that would be losing their right to vote."

Newman and other Democrats also restated their arguments that around 200,000 people would be disenfranchised by the proposal, and that voter impersonation fraud "does not exist in the state of Missouri."

Several Democrats also said that Republicans have been using examples of voter registration fraud and that requiring a photo ID would be irrelevant to fixing that problem. House Speaker John Diehl, R-Town and Country, disagreed, and actually left the podium to speak in favor of photo ID requirements on the House floor.

"The (current) secretary of state turns a blind eye to voter fraud, (and) the prior secretary of state turned a blind eye to voter fraud," Diehl said.  "I helped run the largest election jurisdiction in this state (St. Louis County).... I was in the trenches for several years, (and) I saw busloads of people being brought to the polling places after judges ordered polling places (to be) open late.... and I saw election judges and judges allowing people to vote with no identification, just showing up and saying 'I'm Joe Smith, I promise! Let me vote!'"

Both bills passed along pure party line votes; HJR 1 passed 118-39, and HB 30 passed 118-37.  Both margins are veto-proof.  They now go to the Missouri Senate, where Republican leaders last year gave up on the photo ID issue in exchange for passing the 72-hour abortion waiting period law.  It's not as high of a priority in the Senate, according to Republican Floor Leader Ron Richard, R-Joplin.

"How many times have we passed that thing, every year? I guess (we've not had) anything else to do," Richard told reporters Thursday.  "I'd rather move back the primary date or something, if I had my druthers, to June or something."

Richard says, though, he'll gauge interest among Senate Republicans before deciding whether to advance the House photo ID bills.

Read our earlier story below:

A proposed constitutional amendment to allow a voter photo identification law to be passed has received first-round approval in the Missouri House. 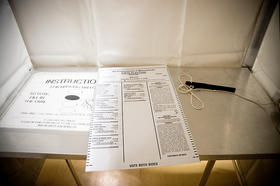 Republican lawmakers have been pushing the measure ever since the Missouri Supreme Court tossed out an earlier requirement passed in 2006. The Missouri legislature passed a photo ID bill in 2011, but it was vetoed by Gov. Jay Nixon, a Democrat.  This year's version, House Joint Resolution 1, is sponsored by state Rep. Tony Dugger, R-Hartville.

"This is a 'may,' (not a 'shall')," Dugger said.  "This would be placed in our constitution (and) would allow us the option of requiring a photo ID to vote in this state."

If HJR 1 passes both the House and Senate, it would likely go before Missouri voters in November 2016.

Dugger is also sponsoring the implementing bill, HB 30.  If that bill were to become law, the photo ID requirement would automatically take effect if Missouri voters were to pass HJR 1 next year.  However, Nixon will likely veto HB 30 if it passes both chambers.

Brandon Ellington, D-Kansas City, chair of the Missouri Legislative Black Caucus, argued against the measure on the House floor Wednesday.

"Currently, voting is a right; as long as I can prove I'm a resident of that district, I have the right to vote," Ellington said.  "This bill right here, if I don't have the underlying documents to get a (photo) ID, they deny me my right to vote…if I sign an affidavit for a provisional ballot, they’re effectively denying me my right to vote at the poll."

"If you don't realize that this is a racial piece of legislation, then you have the problem, and you need to go back and read your history, because I know mine!" May said to Brattin.  He responded, "Well prove it, lady! Prove that this is racial legislation!"

Brattin and May were talking, and almost shouting, over each other:  "It's racial legislation because it creates a disparity and a right!" May said, as Brattin shot back, "only because you say so!"

Following their exchange, Brattin spoke in defense of the photo ID proposal:

"Mr. Speaker, we hear that this is about racism and trying to put a stop to people voting.  This is protecting that person's right to vote to insure that busloads of people don't come in and steal their vote; and this is just a way to do that, to insure that their vote is their vote by showing a picture of their smiling face on their ID...that's all that this (resolution) does."

Several Democrats in the House chamber howled in shock over Brattin's use of the word "busloads."

House Joint Resolution 1 passed on a voice vote.  It needs one more vote from the full House before moving to the Missouri Senate, where it will likely face a filibuster if it makes it to the floor there.