Hawley, Missouri’s GOP nominee for the U.S. Senate, is joining a number of Republicans who are upset over how the letter from Christine Blasey Ford was leaked to the press several weeks ago. 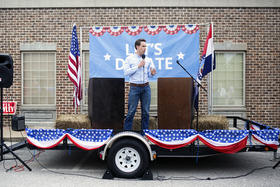 That letter – in which Ford alleges that Kavanaugh assaulted her 36 years ago – was initially sent to Feinstein, a California Democrat. It was leaked to the news media, and eventually led to Thursday’s public testimony by Ford and Kavanaugh.

Hawley contended that Feinstein or her staff may have been guilty of “violating the confidentiality of Dr. Ford, and obstructing the work of the Senate Judiciary Committee. Potentially also obstructing an FBI background investigation.”

Feinstein has denied that she or her staff had any involvement in leaking the letter. It would be up to the U.S. attorney general to decide whether a special counsel should be appointed.

The FBI is conducting an investigation into Kavanaugh’s background this week.

Hawley asserted in a call with reporters Monday that Kavanaugh was innocent of any sexual assaults, and that Feinstein was part of a Democratic effort “to smear the name of a good man.”

Hawley said he also was blaming the Democrat he hopes to oust: U.S. Sen. Claire McCaskill. He pointed to McCaskill’s ties to Feinstein and Senate Minority Leader Chuck Schumer of New York.

“Claire McCaskill has gone right along with it,’’ Hawley said.

McCaskill said in a statement that it was Hawley who was playing politics.

“This is what a partisan does, and what causes the problem in the first place,” she said. “We need to be respecting one another, talking to one another. And calmly completing our work - not pointing fingers.”

McCaskill opposes Kavanaugh’s confirmation. She has cited his views on various issues, notably his apparent support for allowing donors to keep secret their campaign contributions to certain political groups.

Activist groups on both sides cite Kavanaugh’s apparent opposition to the 1973 Supreme Court decision, known as Roe v Wade, that legalized most abortions.

Blunt faulted Feinstein for not turning over Ford’s letter months ago to the FBI; Feinstein has said she was honoring Ford’s wishes to keep her accusation private.

In any event, Blunt predicted that Senate Republicans would have the votes for Kavanaugh to “be confirmed in the next few days.”