Photographer documents towns at mean center of US population, including those in Missouri, Illinois

“The Centroid” refers to the point of the United States’ mean center of population. Baltimore-based photographer Nate Larson has taken this construction and run with it, documenting life in the “Centroid Towns,” which have been calculated by the U.S. Census Bureau since 1790. Here's how that's done.

Over the course of time since 1790, the Centroid point has moved steadily westward from Chestertown, Maryland to Plato, Missouri in 2010. Larson is currently a resident at Paul Artspace, an artists’ collective in north St. Louis County, continuing to work on the project.

“De Soto was the center in 1980 and, in 1970, Mascoutah, Illinois was the center,” Larson said on Monday’s St. Louis on the Air. “They’re projecting it will be in Hartville, just a half an hour outside of Springfield [Missouri], and it looks like it has stabilized for the moment. I’m curious with immigration, as this coordinate is determined by where people live, I’m curious if California keeps getting more immigration it will keep moving west or if Texas gets more immigration it will move south.”

Host Don Marsh was joined in studio by Larson and Mike Behle, the founder and director of that organization, to discuss the project and residency program.

Originally, Larson started his project by documenting solely the Centroid point, but he found himself wanting to know more about towns that surround the point. Now, he’s built out his project to include information collected from historical societies, museums, county archives and profiles of the people who live in town. Currently, he has about 27 hours of tape he’s taken from oral histories during the residency. That’s in addition to his photographic portraits. 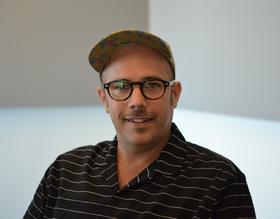 Larson is currently stationed at Paul Artspace to work on the project. Behle, who started the artists’ collective, said the space is meant to “support artists and writers and curators and bring work to St. Louis from across the country and send that work out.”

The space is a ranch-style house that sits on six acres and houses three residents per session in private bedrooms and studios with a communal living space, located off Sinks Road in Florissant.

“Since we opened in the summer of 2013, we’ve hosted over 60 residents and folks can stay from one month to three months,” Behle said. “There’s an application process. … We’re looking for diversity, really engaging and thoughtful work. When Nate’s application came through and he shared the Centroid Towns project, it was fascinating. It spoke to the fact we’re here to give time and space for folks to conduct research. As a photographer, Nate looks at us and gives us something to look back at, a mirror of sorts.”

St. Louis on the Air brings you the stories of St. Louis and the people who live, work and create in our region. St. Louis on the Air host Don Marsh and producers Mary Edwards, Alex Heuer and Kelly Moffitt give you the information you need to make informed decisions and stay in touch with our diverse and vibrant St. Louis region.