'Never forget': St. Louis veterans will call roll of Missourians who died in World War I

As world leaders meet Sunday in France for a grand tribute marking the 100th anniversary of the armistice that ended World War I, a group of St. Louis area veterans will gather at a stone picnic shelter at Sylvan Springs Park in St. Louis County to solemnly call the roll of Missourians who died “over there.”

They plan to begin at 11:11 a.m. — the 11th hour of the 11th day of the 11th month — the beginning of the ceasefire a century ago that, in effect, ended the war. Each name will be followed by the tolling of a bell.

“Our belief is ‘never forget,’ ’’ said Mike LeBlanc, 10th district commander of the Missouri American Legion. “Avowing the name and following it by a toll of the bell brings that person back to life for those few seconds.”

Many of the fallen Missourians are buried at Jefferson Barracks National Cemetery, just across the road from Sylvan Springs, LeBlanc said.

The veterans will also pay tribute to Marine Cpl. Leo P. O’Brien and Marine Sgt. Walter Henry LePere. O’Brien was killed in action in France in July 1918 and is buried at Jefferson Barracks. American Legion Post 177 in Eureka is named for him. Marine Sgt. Walter Henry LePere, the namesake of American Legion Post 208 of Manchester, was killed in October 1918. He is buried at the Meuse-Argonne American Cemetery and Memorial in France.

Before the roll call, the veterans will meet at 9 a.m. in the cemetery chapel at Jefferson Barracks for a memorial service — something they do every Veterans Day.

“We feel it's important for us to remember those of us that aren't here anymore,’’ LeBlanc said.

In 1919, President Woodrow Wilson proclaimed that the anniversary of the ceasefire would be commemorated as Armistice Day. In 1954, the day became known as Veterans Day to honor veterans of all the nation’s wars.

LeBlanc and several friends have been compiling the list of names by cross-referencing casualty lists compiled by the branches of service. So far, they have about 3,000 names. They are including troops who died in the Spanish flu pandemic that spread worldwide after the war.

LeBlanc expects the reading to take between three and four hours. The group invites people to stop by and pay their respects.

“And if somebody wants to read a few names or ring the bell, you know, everyone's welcome to participate,” he said. “It’s a very organic demonstration of honor.” 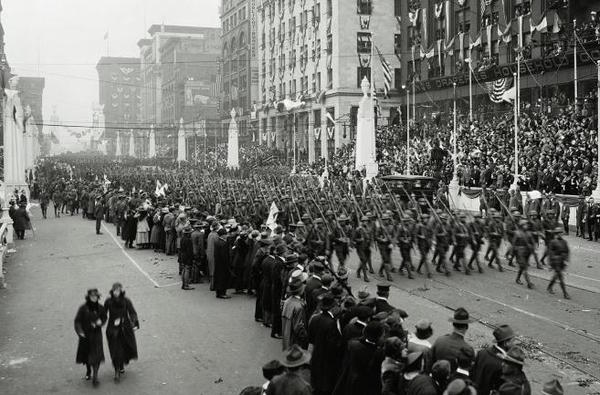 Missourians in the Great War

More than 10,000 Missourians were wounded or killed in action in World War I, according to Missouri state archives. Nearly 750,000 registered for the draft, and 156,000 served in the war. Gen. John J. Pershing, who commanded the U.S. troops — known as the American Expeditionary Forces — was born in Laclede, Missouri.

Many soldiers from St. Louis served with the 35th and 89th Army divisions in France and Belgium and were in the thick of the fighting along the Western Front.

World War I was known as The Great War because it was bigger and deadlier than any war the world had seen. More than 30 countries were involved between 1914 and 1918 with a death toll of more than 8 million soldiers and an estimated 13 million civilians. About half of the 116,515 U.S. service members who died in the war were killed in combat, while another 50,000 died of disease and other causes.

The war started in Bosnia in 1914, with the assassination of Archduke Franz Ferdinand of Austria-Hungary, and eventually spread throughout Europe. The United States entered the war in 1917 as an Allied nation, on the side of France, Great Britain, Russia and Italy. Germany led the Central Powers that included Austria-Hungary, Turkey and Bulgaria.

After the sinking of American merchant ships by German U-boats, President Woodrow Wilson appealed to Congress and his fellow Americans to help defeat the German Empire — to make the world safe for democracy. Congress declared war on Germany on April 6, 1917.

World War I was frequently called “the war to end all wars” because many believed — or hoped — that such large-scale suffering would not happen again. Although the Great War was overshadowed by World War II, historians say its influences are still felt today. The United States established itself as a world power. And the division of the German and Ottoman empires after the war changed the makeup of Europe and the Middle East, setting the stage for current conflicts.

9 a.m. Memorial service in the cemetery chapel at Jefferson Barracks

11 a.m. Reading of names of 3,000 Missourians who died in World War I at the Ordnance Shelter, Sylvan Springs Park, 300 Halsey Road, (across from the cemetery).