Gov. Jay Nixon plans to call a special session of the Missouri General Assembly to pay for the Missouri National Guard and Missouri Highway Patrol’s operations in Ferguson and the St. Louis region. 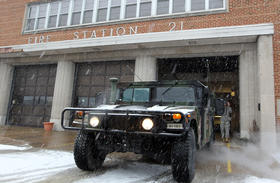 It’s a move that comes amid immense disapproval of how the governor handled the aftermath of a grand jury’s decision to not indict Ferguson Police officer Darren Wilson for shooting and killing Michael Brown.

In a press release sent out on Friday night, the governor’s office stated that Nixon talked with legislative leaders about “the importance of taking action quickly to ensure that Guard members are paid on Dec. 15.”

The governor’s release said that the 2015 fiscal year state budget that the legislature approved included $4 million for National Guard state emergency duty response costs and $3.4 million for the State Emergency Management Agency (SEMA) for expenses incurred by state agencies, including the Highway Patrol, “in responding to disasters and emergencies between July 1, 2014 and June 30, 2015.”

“This was a productive discussion,” said Nixon in a statement, referring to his discussion with state lawmakers. “It’s clear these legislators share our commitment to public safety and understand the need for prompt action. I look forward to working with legislators in the coming days to ensure these vital resources are available.”

Besides paying for cost that the Guard and Highway Patrol already incurred, Nixon’s office said that other activities – such as debris removal – could result in additional costs. And the governor’s office contended that exceeding the emergency duty appropriations “would also limit the ability of the state to respond to other emergencies that could arise.”

“The dedicated men and women of the National Guard and the Missouri State Highway Patrol are playing a critical role in keeping people safe and protecting property in the St. Louis region,” Nixon said in a statement. “Time is of the essence. It is vital that we act quickly so that we can fulfill our obligation to the men and women who are so bravely and capably serving their fellow citizens.”

The governor's release went onto say that details regarding the timing and scope of the special session will be released in the coming days.

Nixon’s decision to call a special session comes after he faced widespread criticism for how he deployed the National Guard on Monday. 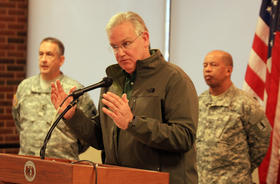 A few political figures – including Ferguson Mayor James Knowles III and Lt. Gov. Peter Kinder – questioned why the Guard wasn’t on West Florissant Avenue before businesses there were burned and looted.

That criticism continued on Friday when Dellwood Mayor Reggie Jones said his city was promised that its business district would be protected by National Guard troopers. He said "they failed to arrive."

Nixon ramped up the Guard’s presence in the St. Louis area on Tuesday, but didn’t directly answer a question about whether the Guard was in the commercial business district. He told the St. Louis Post-Dispatch on Friday that violence was so prevalent in Ferguson after the grand jury decision that law enforcement officials had to decide between "lethal force or property damage.”

House Majority Leader John Diehl -- a Town and Country Republican who will become the speaker of the Missouri House in January -- said in a statement "that both parties in the legislature are committed to ensuring the men and women in law enforcement and in the National Guard are fully compensated for their service in protecting our communities during unrest."

But Diehl emphasized that lawmakers weren't happy that the governor "provided little to no communication" since Brown's death in August. 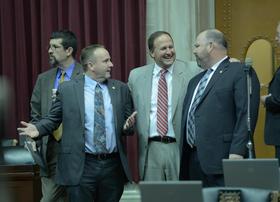 "Even the mayors of those cities being overrun by looters and vandals calls go unanswered by the governor," said Diehl, alluding to criticism from Knowles and Reggie Jones. "Without consultation or communication, the governor has spent millions of taxpayer dollars while making poor decisions impacting the safety of our communities."

Diehl said Nixon "has yet to provide us with a written plan and has not provided basic answers to the decisions that have put us in this situation." He said the governor needed to "come forward and provide answers."

"We are open to a special session to address this crisis, but we expect the governor and his staff to provide a written and responsible plan going forward," Diehl said. " We also expect the governor and his staff that made decisions during this crisis come forward and appear before the legislature.  It is time for an accounting and for leadership that will not only communicate but work with the legislature to solve this crisis."

From a quick glance at social media on Friday, that disparagement of the governor’s decision-making extended to his call for a special session. For instance, House Speaker Tim Jones, R-Eureka, Tweeted this out:

I completely agree the #MO National Guard should have whatever resources they need...including a new Commander in Chief. #Fergsuon— Tim W. Jones (@SpeakerTimJones) November 29, 2014

And state Sen. Maria Chappelle-Nadal -- a University City Democrat who has emerged as one of the governor's harshest critics since Brown was killed -- sent out the following Tweets in reaction to the special session decision:

I've been waiting for this showdown for years. Better come w/ a sweet deal bc I can filibuster for hours & hours...like the Energizer Bunny.— MariaChappelleNadal (@MariaChappelleN) November 29, 2014

Hey @GovJayNixon, remember that plane u bought that cost $7 million. U better think about trading it in to cover the cost of the Nat'l Guard— MariaChappelleNadal (@MariaChappelleN) November 29, 2014

In a slight dig at legislators, Nixon's release noted that the special session was necessary because the legislature stopped using "estimated" designations for the state’s emergency duty costs. (Read more about the debate over the 'E' designation here.)

Violence Diminishes In Ferguson, As Law Enforcement Ramps Up

The second day of post-grand jury protest in Ferguson unfolded in a familiar pattern. It began peacefully and ended with broken windows, tear gas and instructions to disperse. Forty-five people were arrested, the majority for misdemeanor offenses.

Downtown Demonstration Shuts Down I-44 Near The Dome: Highways Blocked In Many Cities

About two hours into the protest, a large portion of the crowd marched up the westbound exit ramp to Interstate 44 at, shutting down first the ramps, and then the highway near the Edward Jones Dome. All told, traffic in the area was disrupted for about half an hour.

Jessica Hentoff has gone all the way to Israel to bring people of markedly different perspectives together. This summer, Hentoff, artistic and executive director of Circus Harmony, took members of her tumbling group, the St. Louis Arches, to the Middle East. There, the Arches joined with Arab and Israeli youth from the Galilee Circus, where they work and learned together, setting aside religious, political and cultural differences.