As of Thursday, the Missouri Highway Patrol is now in charge in Ferguson. And Missouri Gov. Jay Nixon, who announced the change, said at a news conference that the public should see a difference at once.

The St. Louis County police have been widely criticized for their aggressive, even militaristic stance -- using armored vehicles and tear gas -- to quell protests stemming from last Saturday's police shooting.

"Lately it looks a little like a war zone," said the governor, although he emphasized that he had the deepest respect for all law enforcement and wasn't going to place any blame.

In putting the state Highway Patrol in charge, the governor said his aim was to set a "different tone."

"A softer front might yield an avenue for appropriate energy" by protesters, Nixon said. "I would hope the appropriate release ... would not lead to additional violence."

The Highway Patrol is under the control of the governor.

The new man in charge -- Capt. Ronald S. Johnson, who now heads the patrol's Troop C in the St. Louis area -- noted that he had grown up in north St. Louis County and that he was familiar with the region's issues, including the racial unrest.

Johnson added that he'll personally oversee the change. "When we talk about boots on the ground, my boots are going to be on the ground,'' he said.

Nixon laid out his decision during a news conference at the University of Missouri-St. Louis, which is close to Ferguson. He said he decided to act now "because all of us have seen some degree of escalation in response and conduct" since the protests began.

Nixon acknowledged that he had been reluctant to take that step because he first wanted to see how the local police would do. "You clearly want the solution to be as close as possible," he said. But "I just felt that at this point, the attitudes weren't improving."

Even so, the governor rejected calls for a special prosecutor to probe the cause of the protests: last Saturday's police shooting that caused the death of 18-year-old Michael Brown.

"You've got two parallel tracks,'' Nixon said, referring to the existing investigations by the St. Louis County police and the U.S. Justice Department. "Adding a third at this particular juncture'' was inappropriate and unnecessary, in his opinion.

Dooley said, "What we have seen in St. Louis County the last few days is a tragedy" on all fronts.

"The world is looking at us," Dooley said. "How we represent ourselves speaks volumes to young people."

With this high-profile visit, Nixon was obviously seeking to tamp down the raging unrest in Ferguson – and, perhaps, stem the damage to his own reputation – by adopting a hands-on approach after days of appearing to watch from afar. 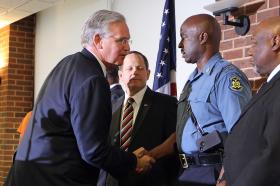 Nixon, who has had a tense relationship over the years with some African-American elected officials, got some support Thursday from U.S. Rep. William Lacy Clay, D-St. Louis. Clay and Nixon are old friends.

Clay said in a statement that he approved of Nixon's decision "to transfer control of public security in Ferguson to the Missouri Highway Patrol."

The congressman then added, "Since the tragedy occurred this past weekend, I have been in regular contact with Governor Nixon regarding the troubling situation in Ferguson."

The governor spent much of Thursday in north St. Louis County, talking to law enforcement authorities, religious leaders and the public about how best to resolve the controversy and chaos that has swept through Ferguson after Saturday’s police shooting.

But Nixon emphasized that he also thought it was necessary and important that protesters be allowed to continue their activities peacefully without disruption by the police.

“There’s a certain level of emotion that must be expressed in order for us to reach a higher plain,’’ Nixon said during a brief address before pastors and the public gathered at Christ the King United Church of Christ in Florissant.

The governor reaffirmed, however, that the protests must not devolve into the fire-bombing and looting that has plagued the area for several days – nor should police be as heavy-handed.

Protesters must “respect the property and the person of their neighbors,’’ Nixon said. 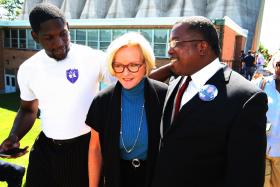 His comments came shortly after those of U.S. Sen. Claire McCaskill, D-Mo., who asserted that a first-step must be "demilitarizing the police presence’’ – a reference to officers clad in riot gear and firing off tear gas. "I think the police response has become part of the problem instead of a part of the solution,'' she said.

The battles between the police and protesters, along with the arrests of journalists and some local officials, has put Ferguson in the national spotlight.

In fact, Nixon said he was late to the church meeting because he’d been on the phone with President Barack Obama, who has become so concerned about the situation that he delivered a national address.

While Obama expressed confidence in Nixon, he criticized some of the police's methods as well as the violence and looting:

"When something like this happens, the local authorities, including the police, have a responsibility to be open and transparent about how they are investigating that death and how they are protecting the people in their communities. There is never an excuse for violence against police or for those who would use this tragedy as a cover for vandalism or looting. There’s also no excuse for police to use excessive force against peaceful protests or to throw protesters in jail for lawfully exercising their First Amendment rights."

Some of Nixon's comments at the church generated a standing ovation at the church. But that hasn't been the case for days, as he's become a brunt for criticism -- in the national press and on social media -- for failing to take a leadership role sooner.

The complaints have been particular harsh on Twitter, where some -- including state Sen. Maria Chappelle-Nadal, D-University City -- have even directed expletives at the state's chief executive. Earlier this week, Chappelle-Nadal had been in downtown Ferguson waving a giant head of Nixon and shouting that he was at fault for some of the unrest.

When asked about his critics, the governor said that he preferred "to put gasoline in the engine of a fire truck to fight a fire. Not pour gasoline on the fire."

In any case, by late Wednesday, Nixon and his staff changed course. He canceled plans to attend the State Fair in Sedalia, where he had been scheduled to preside over the annual Governor's Ham Breakfast, which usually attracts most of the state's top political players in both parties. Nixon's no-show appeared to the first by a governor in decades.

The governor's staff noted that he had first called for a federal investigation on Monday. He then attended a large meeting Tuesday night in Florissant to discuss the issue and delivered brief remarks. Some close to him said privately that Nixon initially thought it best to defer to local authorities until it became clear that the situation in Ferguson appeared to be deteriorating even more.

Some officials on the scene, others remain far away 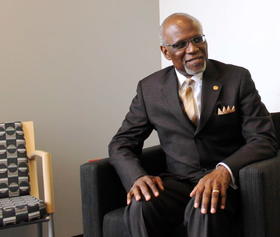 On Thursday, however, many of the state's top officials were on site. Nixon and McCaskill were holding private meetings in north county to discuss the matter. State Treasurer Clint Zweifel -- who grew up in the Florissant-Ferguson area -- also was at the church. Secretary of State Jason Kander also had stated on Twitter that he planned to stop by.

All four officials were Democrats. So far, none of the state's Republican elected officials has made public appearances in or near Ferguson. U.S. Sen. Roy Blunt, R-Mo., did discuss the matter with reporters during a stop Tuesday in St. Louis. And he issued a statement Thursday that reaffirmed his concern.

“Today, I spoke with Attorney General Eric Holder about the continued investigation in Ferguson, and I continue to monitor what I believe is close coordination between county and federal authorities," Blunt said. "It's important to remember that this tragedy began when a young man lost his life, and I support local and federal officials in their efforts to conduct open, transparent, and parallel investigations into what happened here. Michael Brown's memory, his family, and his community are not well-served by more violence.”

McCaskill had sent out similar comments earlier in the week. On Thursday, she appeared especially disturbed about the continued violence but tried to keep her public statements to a minimum. Among the reasons she was on site Thursday, she said, was "to be respectful of the people protesting and show them some support."

With a few exceptions, many regional and local officials have been wary of how best to address the situation in Ferguson without looking they were trying to score political points. That has been especially true of the two nominees for St. Louis County executive -- Democrat Steve Stenger and Republican Rick Stream -- who appear to have stepped in the shadows this week, after their high-profile victories on Aug. 5.

A Stenger ally said the county councilman had been communicating regularly with incumbent Charlie Dooley, who was routed by Stenger in the Democratic primary. Stenger's ally said that he didn't want to appear to be overshadowing Dooley, who is still in office.

Dooley had been among the first officials to recognize Ferguson's potential as a powder keg, and showed up over the weekend to address protesters.

A police officer's killing of Michael Brown, 18, in Ferguson, Mo., has ignited racial tensions in a town whose population is two-thirds black — and whose police force reportedly has three black members. Some black residents say that long before Brown's death, they saw the police as a potential threat.

"It's the constant pressure of every time a police officer gets behind us, we're gripping the steering wheel," Anthony Ross, 26, of neighboring Berkeley tells NPR's David Schaper. He added, "Everything on the car is right."

The police chief of Ferguson, Mo., says his department has made race relations a "top priority," after a shooting of an unarmed black teen sparked days of protests.

Another man (this time armed) was reportedly shot by a St. Louis County police officer early Wednesday after police responded to reports of shots being fired.

The Missouri State Highway Patrol will now supervise security in Ferguson, Gov. Jay Nixon announced at a news conference Thursday. Protesters have clashed with police since the shooting of unarmed teen Michael Brown on Saturday.

"For the past several days, we've all been deeply troubled by this crisis," Nixon said, "as the pain of last weekend's tragedy has been compounded by days of grief, and nights of conflict and fear."