There will be another attempt to pass a payday loan bill during next year's legislative session in Jefferson City. State Rep. Charlie Davis, R-Webb City, is planning to refile a proposal he submitted earlier this year but did not receive a hearing. It would place limits on how often a payday loan can be renewed and how much money a person is allowed to take out at one time.

The aim is to protect consumers, without having a devastating impact on the short-term loan industry, according to Davis.

"The last thing I want to do is put the payday loans out of business," he said. "They do a great job for the things they were originally intended to do. It's just sometimes we have some individuals who make very poor decisions."

Many businesses that offer quick access to cash have come under scrutiny for terms attached to the loans. The agreements can include much higher interest rates than traditional banks and can have the ability to be renewed in a manner that could allow interest and fees to pile up. Many in low-income areas initially find payday loans attractive because they need money to cover some bills and might not have access to banks. But in several cases, the terms of the loans make it tough to pay back the money.

Interest rates have been a key focus for groups calling for more regulation.

The cap on a two-week loan in Missouri can be as high as 75 percent. St. Louis 20th Ward Alderwoman Cara Spencer recently told St. Louis Public Radio that the rate lower in surrounding states. She is the executive director of the Consumers Council of Missouri and spearheaded support of Proposition S, which was passed by city voters earlier this year. It sets some regulations for payday loan operators, including calling on them to offer information on alternatives to short-term loans.

Davis does not see interest rates as a big problem.

A loan with a term of a couple of weeks is usually paid off by the time it is due, he said. But he wants to do more to help people who fall into circumstances where they can't repay the money on-time. 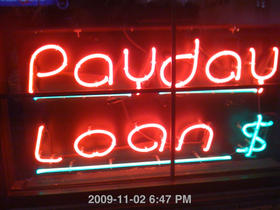 Davis said it's too early to know if the bill will be approved in Jefferson City next year.

He said the proposal is leading to conversations among lawmakers, payday loan companies and consumer advocates that could eventually prompt all to find a balance between regulations to protect customers and making sure those rules do not force short-term loan companies to go out of business.