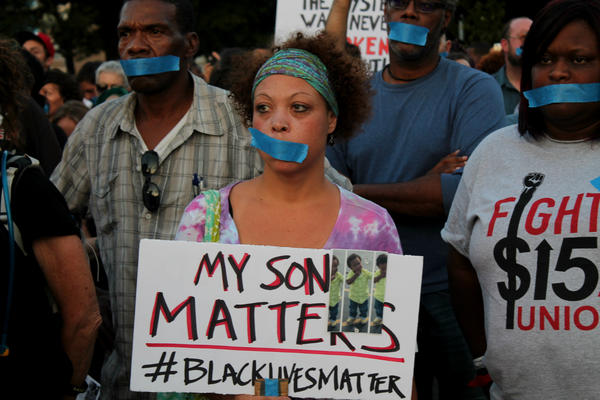 Their call for Interim Chief Larry O’Toole to leave the department’s head post comes more than a week into daily protests against a judge’s decision to acquit former officer Jason Stockley, who is white, in the 2011 fatal shooting of Anthony Lamar Smith, a black man.

In calling for O'Toole to step down, Democratic state Rep. Bruce Franks spoke about a black officer who was shot while off duty by a white officer in St. Louis as well as an undercover officer, who is black, who was arrested Sept. 17 during a downtown protest.

"Blue silence is violence," Franks said as the crowd chanted along. "So what we doing today, we, the people, are calling for the resignation of Interim Chief Lt. Col. Larry O'Toole immediately. Not only are there statements, but there are Sunshine requests delivered to their desks right now that has anything to do with the cover up of either one, both, of these particular incidents," Franks said.

O’Toole has come under fire after his comments after police arrested more than 80 people on Sept. 17, including a St. Louis Post-Dispatch reporter, an undercover officer and people who say they live in the area. That night, O’Toole said: “We’re in control. This is our city. And we’re going to protect it,” O’Toole said, adding later, "I'm proud to tell you the city of St. Louis is safe, and the police own the night."

St. Louis has launched a national search for a new chief, but isn’t expected to put someone into place until mid-2018.

Protesters also have called for giving the Citizen Oversight Board, which looks into accusations of police misconduct, subpoena power to compel officers to testify.

On Monday night, the crowd of hundreds, led by Franks and other organizers, started at 16th and Market streets, then went to the police department on 19th and Olive streets, about six blocks away. After 8:30 p.m., about 60 people made it on to an Interstate 64 ramp, with the rest not far behind, but were met by bicycle police. The next stop was barriers outside of Busch Stadium, where the Cardinals were playing their rivals, the Chicago Cubs.