Religious 'shield' proposal being blocked in the Missouri Senate

Legislation designed to allow business owners and clergy to refuse to participate in same-sex weddings is being blocked in the Missouri Senate.

Senate Joint Resolution 39 is a proposed constitutional amendment that would bar the state from "penalizing clergy, religious organizations, and certain individuals for their religious beliefs concerning marriage between two people of the same sex."

It's sponsored by Sen. Bob Onder, R-Lake Saint Louis.  He described the bill as "shield, not a sword," and said it's needed to counteract potential "negative consequences" of last year's U.S. Supreme Court ruling that legalized same-sex marriage nationwide. 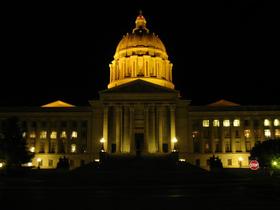 "Justice (Samuel) Alito warned that those who dissent from the new doctrine will be labeled as bigots and treated as such by governments, employers and schools," Onder said during floor debate. "Their chief concern is that the power of government will be mobilized to penalize and persecute those who disagree."

The "you" Holsman was addressing was Onder, who responded that his bill would not harm the LGBT community or seek to revoke their right to marry.

The filibuster is now into its second day, having crossed the 24-hour mark just past 4.00 p.m. Tuesday. Democrats have been holding the floor for more than 20 hours; they're speaking against SJR 39, as well as on numerous other topics, including other bills, Donald Trump, slick roads, soft drink ads in foreign countries, and "Jesus sightings" in foreign objects.

The filibuster is also a hot topic on Twitter. From the Kansas City Star's Jason Hancock:

. @JasonHolsman says wife texted him asking how long filibuster will go on. Says he told her "Thursday or beyond." #moleg #SJR39— Jason Hancock (@J_Hancock) March 8, 2016

From Jolie Justus, the last openly gay member of the Missouri Senate:

Those supporting the amendment are also tweeting:

Thank you Sen. @BobOnderMO and #moleg leadership for putting #SJR39 on the floor, showing resolve & standing up for religious liberty in #MO— Peter Kinder (@PeterKinder) March 8, 2016

If the measure were to pass the General Assembly, it would have to be approved by voters before becoming part of the state constitution.