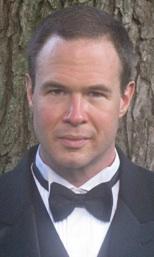 The Springfield-Drury Civic Orchestra, which includes members of the local university music-school faculties, players from the Springfield Symphony and other area orchestras, college music students and "civilians," was founded in 2005.  According to Music Director/Conductor Christopher Koch (who, like his musicians, wears at least a couple of other hats--he also serves as Associate Professor of Music at Drury University and Music Director of Springfield Regional Opera), the SDCO's goal is to provide "something different", to perform repertoire new both to local audiences and to the players themselves.

The orchestra opens its 2018-2019 season on Thursday September 6th at 7:30pm in the Juanita K. Hammons Hall with a major blockbuster of a concert: the Springfield-area premiere of what Koch calls "one of the greatest symphonies ever written," the 90-minute-long Symphony No. 9 by Gustav Mahler, written in 1908-09 and the last completed symphony by the Austrian composer/conductor.

"We are really excited to be bringing Springfield the premiere of Mahler's 9th Symphony. It's one of those pieces that is just up there in the stratosphere, and that has inspired people in all ways for quite a long time," says Koch.

In our interview I referred to the Mahler 9th as not only intensely moving and deeply emotional, but, like much of Mahler's later work, valedictory. Christopher Koch readily agreed. "That's a great word, actually.  For anyone who knows Mahler and loves Mahler, he was a mess of contradictions in human form!  He was brilliant and flawed; incredibly enthusiastic but also incredibly depressive; he was both charming and difficult. He was the embodiment of just about every human experience"--as is his music.

Koch says Mahler's music presents a "huge palette of different styles and colors. But one thing about his last couple of works--and for sure the 9th Symphony--is that it loses that 'self-conscious' quality, that he's often putting his 'wares' on full display: his skills with orchestration, his skills as a conductor, his many ideas trying to challenge different instrumental groups to play higher and louder and faster and at the same time softer and slower.  And that's part of the wonderful carnival that is Mahler.

"But in the 9th (Symphony), all this drops away and it becomes, instead of a studied reflection, perhaps, of an idea or somethng, it just becomes his summing-up somehow.  It's a very honest piece.  It has some of those wonderful 'Mahler moments', those beautiful, huge forte chords and beautiful melodies.  And it has all the ingredients that any Mahler piece has.  But it's also amazingly--and often painfully--personal. There is very little in the late Romantic (orchestral) literature--or any symphonic repertoire really--that takes a hundred-plus (group of musicians) and turns it into a moment of the most exquisite intimacy.  It's one of those pieces you can daydream about."  Koch says he often distrusts composers who try consciously to "make a 'statement about something' in their music," as opposed to simply allowing it to happen "naturally, as it does, I think, in this piece."

The Springfield-Drury Civic Orchestra is on a "mission" to perform all the Mahler symphonies that have not been played in Springfield up to now, says Music Director Christopher Koch. Two years ago the orchestra played Mahler's Symphony No. 6, in which the composer, despite being in what Koch calls "a good mood," wanted to "write a piece depicting tragedy and loss and death. And his musical protagonist is defeated in the 6th." It dates from 1904. But then we fast-forward a couple of years to 1908-09, when Mahler was writing the 9th Symphony, and he had actually "suffered a great deal by this point," notes Koch: he had lost a daughter, lost some important jobs, his relationship with his wife had become more difficult. And he received a diagnosis of a fatal heart condition.  Still, Koch adds, "I don't think (Mahler) was setting out to write a piece about sadness or tragedy.  But it IS a piece that makes anyone stop and think about life and the end of life... the choices we've made... and the internal frustrations and joys and disappointments of daily existence. For me the 9th is a musical working-out of those feelings."

The Mahler Symphony No. 9 is, as Christopher Koch readily admits, "one of the most fiendishly difficult pieces ever written," at least from the musicians' standpoint.  It also requires a gargantuan orchestra.  Koch will have just over 100 players for this concert--which is exactly what the music requires.  In addition to a very large string section, Mahler's score specifies a doubling of the usual orchestral complement of woodwinds, including five flutes, four bassoons, five clarinets. "And he likes to use two harps--that's a Mahler signature."

But in keeping with his and the SDCO's goal to offer repertoire not played before in local concerts, "we've been doing the 'fiendishly difficult' thing for a while now," in works such as the Shostakovich 10th Symphony.  Koch hopes to tackle Mahler's 7th Symphony with the orchestra in a future season, though he admits that it actually "scares me a little bit even sitting here right now!  But one of the things I love about this orchestra is we're all there because we want to be. The things that are the most fun and rewarding are often things that have a challenge built in. So we have to work really hard to do this kind of music. But it's also tremendously satisfying.  Whether it's a professional musician or a sophomore in college that's taking this journey, it's always exciting to me to watch people incorporate this music into themselves and to have an experience of doing somethinig they might not have an opportunity to do again."

At around 90 minutes in length, the Mahler 9th Symphony will take up the entire September 6th SDCO concert. But there will be an intermission, what Koch calls "a brief pause" between the 4-movement work's second and third movements--"because that's the kind thing to do!"

Tickets to the concert, scheduled for Thursday September 6th at 7:30pm in the Juanita K. Hammons Hall for the Performing Arts, are $15 and are available at www.missouristatetix.com, or at the door.  Information on the Springfield-Drury Civic Orchestra is available at http://sdco.drury.edu.

The orchestra's next concert isn't until February 2019 (they should be sufficiently rested from the Mahler by that time!), with yet more Springfield premieres, albeit two very different works in terms of both length and style compared to the Mahler 9th.  One is the Symphony No. 7 of Jean Sibelius.  The other piece is what Christopher Koch calls a celebration of "the new fusion between orchestral and jazz music," in the form of a concerto for orchestra, tenor saxophone and drum kit by New Zealand composer John Psathas.  (It was written for jazz tenor-sax player Michael Brecker, who died in 2007).  Then in April 2019 it's the SDCO's annual Young Artists concert, including a portion of Sir William Walton's Symphony No. 1.  Both of the 2019 concerts will take place in the Gillioz Theatre.