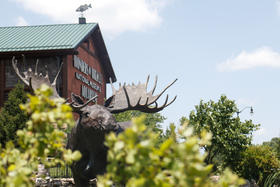 Springfield officials say they would like to create a path – or corridor – that would let pedestrians and cyclists go all the way from the Wonders of Wildlife National Museum and Aquarium to downtown Springfield, and eventually, to Commercial Street.

Listen
Listening...
/
Click above to listen as you read along

Springfield Public Works plans to apply for a BUILD Transportation grant that could help make that happen.

Cora Scott, a spokeswoman for the City of Springfield, said several departments are putting together a proposal for the federal grant.

“It’s a really competitive grant process, but we thought we would throw our hat in the ring and put together a proposal for a corridor,” Cora Scott said.

The “Grant Avenue Parkway Trail Connection Project” would be off-street and would provide safer and better access to some of Springfield’s premiere destinations.

It would also connect to the existing Ozark Greenways Incorporated trail network.

The proposal is still in the works, so Scott said there is no word on how much the project would cost.

As part of the grant requirements, the city would need to come up with a 20 percent match to the grant funding.

There is no guarantee Springfield will be awarded the grant.