Council members presented the revisions publicly, which included an update to the city’s 1975 liquor ordinance. That ordinance has required bars to earn either at least 50 percent or $200,000 per year from food sales for decades. The new proposal would mandate any establishment with a liquor license on Main Street, to earn no more than 50 percent of their revenue from alcohol sales and would remove the $200,000 option. 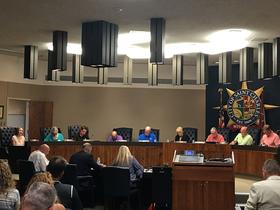 “Rather than take your $200,000 and do your magic with it and turn it into 2018 dollars, which I don’t know exactly what it would be, but it would probably be over a million dollars,” said St. Charles City Councilman Dave Beckering. “Because we have some small business owners who don’t do that kind of volume, we elected to just make it 50-50.”

Beckering is a sponsor of the proposed bill. He said the revisions were made to accomodate bar owners, but many managers and bar staff said this new proposal will still push many bars out of business.

“We do $200,000 worth of food. We don’t do 50-50,” said Curtis Wilcoxen, a manager for the Lloyd and Harry’s bar and grill. “That is a business model you can't really force especially when you’re established with the justification of, we make that 200-thousand, we can still exist.”

Wilcoxen said the updates to the proposal were purposely added to discourage businesses from operating on Main Street. Other bar owners also expressed their disapproval.

“They’re making it impossible for the people here to stay in business,” said Caroline “CJ” Jones, a Lloyd and Harry’s staff member and the mother of the owner. “Fifty-fifty will run everyone of us out of business and they know it.”

Under the points system, bars could receive infractions for serving alcohol to minors and for allowing gambling. Beckering said the points would receive would not last more than a year for a bar or restaurant.

“We think the point system is fair,” Beckering said. “It’s used by other municipalities and if you follow the rules, you won’t have any problems.”

St. Charles city officials have long explained that the proposals to reduce the amount of alcohol are due to the number of misdemeanor crimes on Main Street. The St. Charles Police Department shows a 64 percent increase in minor crimes from 2016 through 2017.

The bill could be voted on as early as Sept. 4.