Donald Trump and Hillary Clinton spent a lot of time during their Sunday night debate dwelling on vulgar comments, leaked speeches, personal income tax payments and tweets of days past.

But one thing the two didn’t talk about at all during their Washington University showdown was Ferguson.

Clinton and Trump were a little more than 10 miles away from a place that sparked a national discussion about the at-times frayed relationship between law enforcement and African-Americans. But neither the moderators nor the selected undecided voters posed any queries about Michael Brown’s shooting death and its aftermath — or any other police shootings that have occurred recently. For some in "spin alley," the omission was striking — especially because the role of policing has been a big part of the presidential contest. 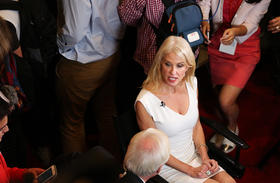 “I was surprised that it wasn’t a question,” said U.S. Sen. Claire McCaskill, D-Missouri, after the debate. “I think it would have been great if that question would have been brought up tonight.”

McCaskill wasn’t the only person who was taken aback. State Rep.-elect Peter Merideth said on his Facebook page that he “honestly can't believe they held a debate in St. Louis without a single direct question about criminal justice reform, policing or racial disparities.”

St. Louis Alderman Antonio French tweeted that he was “disappointed that the candidates weren't asked about policing and #BlackLivesMatter. Very important to our country and our city.”

And soon-to-be state Rep. Bruce Franks tweeted that the debate contained talk about "e-mails and taxes," but "no Black Lives."

But what ever the reason, surrogates for both candidates said before and after the debate that it was worth talking about the issue — especially because the candidates possess very different philosophies on overhauling police practices.

“Donald Trump has a very thin understanding of the challenges that law enforcement faces,” McCaskill said. “I think that he doesn’t really even understand how the state and federal authorities work together. I don’t think he really understands that community policing is something the federal government can help with — and that’s way more important than saying the phrase over and over again ‘law and order.’” 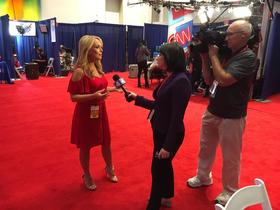 Loudon said that she believed President Barack Obama's administration has been an “administration of division like we’ve never seen in our history.”

“I think [Trump] is about inclusivity and color-blindness,” Loudon said. “It doesn’t matter which race people are to Mr. Trump. He hires the best person. He’s always done that. And I think that he would govern also in that same line. I think Hillary Clinton is going to be more about handing out free stuff. And look, I don’t think that these communities need more free stuff. I think they need to thrive on their own.” 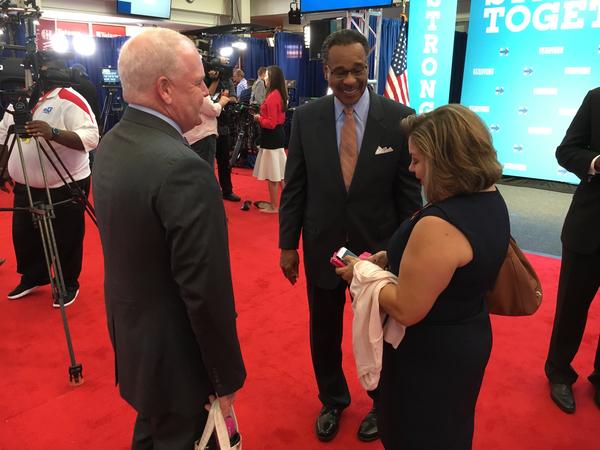 Neither Trump nor Clinton visited Ferguson during their presidential campaigns. And that didn’t change this weekend.

Some Ferguson elected leaders and residents were incensed when Trump falsely declared this year that the city was among the most dangerous places in the world. In fact, U.S. Rep. Emanuel Cleaver, a Kansas City resident who spent a lot of time in Ferguson before Brown’s death, said he “wanted to throw up” when Trump made those comments.

Trump supporter and former presidential hopeful Ben Carson was one of several candidates who did make the trip to the city. And he said that he benefited greatly by going.

“In Ferguson, I sat down with the mayor, with police officials and with community members — including some of the rioters,” Carson said. “They have been meeting with each other on a regular basis, and have established significant camaraderie  — which has improved the environment quite substantially. And I think it is a very wonderful model we should all be looking at.” 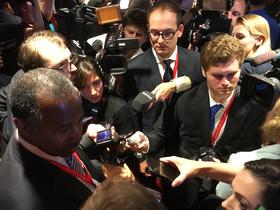 Clinton held a campaign event last year in nearby Florissant, and has campaigned with Brown’s mother Lezley McSpadden. But Clinton did not visit Ferguson during that stop, which puzzled several Democrats who represent the city.

Clinton press secretary Brian Fallon said Clinton has “spoken out on the issues related to Ferguson throughout this campaign.”

“She will continue to speak out about issues that have been provoked by the incident in Ferguson,” Fallon said. “And I’m sure that before long, she will be seeking to get there physically, too. But I think that’s what most important probably to those that spoke out in the aftermath of that shooting is that these issues not recede from the public’s attention – even if they’re not commanding the same amount of headlines. And that’s what she’s doing with her continuing focus on these issues on the trail.”

For his part, Cleaver said it might be best at this point for Clinton to visit Ferguson if she’s elected president. In the heat of a presidential campaign, he said Ferguson residents might perceive any visit in a less meaningful context.

“I grew up in public housing. And I can remember how angry we used to get when the Junior League would drive the bus through the projects looking at us like were caged animals in a zoo,” Cleaver said. “If she asked me, which I think she would, I would say ‘go to Ferguson after you become president and sit down and talk to the people.’ Find out their hopes and dreams and aspirations — and whether or not they’re excited about the progress they made.”