On the Trail: Upcoming election will put House Republican supermajority to the test

Next Tuesday’s election could showcase whether the House Republican supermajority is wave-proof.

After the House GOP shot way past the 109-member supermajority threshold in 2014, Missouri Republicans may be in their strongest legislative position ever in the General Assembly’s lower chamber. And since Republicans represent some Democratic-leaning seats, it stands to reason that the party will face a challenge this year to retain the status quo – especially if GOP presidential nominee Donald Trump underperforms in the Show Me State.

But even though Democratic turnout will likely be much higher than it was in 2014, Republicans may not lose ground.

After all, the House GOP has more money and organizational prowess than the Democratic superminority. And Republicans have shown that they could withstand bad election cycles. When Barack Obama came within a handful of votes of winning Missouri in 2008, the House GOP only lost a few seats. The party actually gained seats in 2012 – a year in which Todd Akin’s disastrous Senate campaign wrecked numerous Republican campaigns.

“We’ve obviously got strong majorities,” said House Speaker Todd Richardson, R-Poplar Bluff. “The secret to our success has not been very complicated. We recruit good people to run. We find good people to run. And they work hard and they’ve got a message that resonates with the people of Missouri.”

While Trump has been faring poorly in traditionally Republican states like Georgia, Arizona and Utah, there’s not much evidence yet that he’s slated to do badly in Missouri. That’s one of the reasons  Richardson believes the “environment’s going to be good here in Missouri overall.” And if the environment is good enough, then it's not out of the question that the GOP could increase their already big majority with pick ups in St. Louis County and Springfield.

Out of the abyss

Perhaps unsurprisingly, House Democrats have a different take on how this year’s election cycle will transpire. 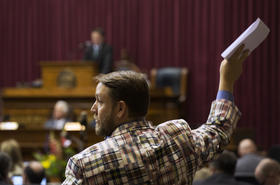 Missouri House Democrats have lost ground in the past three election cycles. But they're hoping to win districts in suburban St. Louis and Kansas City — as well as mid-Missouri and Springfield.

State Rep. Gina Mitten says that even if Trump wins  the state, he may not be that popular in competitive House districts.

“When you have someone like Donald Trump and members of the Republican Party that are not denouncing him, that creates a problem,” said Mitten, D-Richmond Heights. “It’s hard to get voters excited about a race when their top of the ticket is as extreme as they possibly come – and as unpredictable as they possible come. And so who else are they going to get excited about?

“On the flip side, in the seats that we’re actually doing well in, we have folks who are actually interested in what’s going on down-ballot,” she said.

Because so many Republicans are running unopposed or in strongly GOP districts, there’s basically no chance for Democrats to take back the majority this cycle. But Mitten says there are enough strong candidates running across the state to at least chip away at the GOP supermajority.

“I believe that Chris Koster is going to be our next governor. And I think that it’s really important that numbers in the General Assembly are there to support him in that role,” Mitten said. “But having said that, of course, our goal in future cycles is going to be to continue to pick up seats. And I think that we have the opportunity to do that. As the Republican Party becomes more and more extreme, I think that Missourians will start to realize that this is not necessarily the direction that they want to go to. And so that certainly bodes well for us.”

This is one race where the outcome could hinge on how well Trump or Democratic presidential hopeful Hillary Clinton do in south St. Louis County. And it’s also possible that “right to work” could be a factor in how voters act.

House District 90 in Kirkwood: After several unsuccessful bids, state Rep. Deb Lavender, D-Kirkwood, was one of the few bright spots for Democrats in an otherwise dismal 2014 election cycle. She faces a strong challenge from Republican attorney Mark Milton, who unlike her 2014 opponent (former Kirkwood City Councilwoman Gina Jaksetic)  doesn’t posses an exploitable voting record. This is another race where the result of the presidential contest could affect the outcome.

Both candidates have expressed support for placing the Army Corps of Engineers in charge of the West Lake Landfill. But the two contenders differ on “right to work:” Matthiesen is a supporter, while DeLear is an opponent.

While Republicans have represented Webster Groves-based House districts in the past, the city has become more and more Democratic in recent years. Mitten says this is a district where Trump may not be particularly popular.

Hannegan, though, has been able to raise and spend substantially more money than Biermann. And Hannegan also received the backing of Zerr, who lost a close Republican primary for the state Senate earlier this year.

It won’t be easy to defeat Sommer, who has a substantial financial advantage and backing from organized labor groups who likely appreciate her opposition to right to work. But a Dorwart win could prove that Sanders supporters can win in Republican-held districts.

Both Vescovo and Shaul voted for “right to work,” which could be treacherous in a county where organized labor still holds clout. But if Trump does as well in Jefferson County as Missouri Republicans expect, that could benefit GOP incumbents.