UMSL will cut up to 85 positions in cost-cutting move

Updated 3:20 p.m. April 28 with implementation of plan: The University of Missouri-St. Louis said Thursday it was going ahead with a budget plan that would eliminate up to 85 positions on campus but minimize the effect on students.

In a message to UMSL students, faculty and staff, Chancellor Tom George said the two-year plan is designed to close a $15.4 million budget gap through $12 million in cuts and and $3.4 million in new revenue.

"The initial reaction to these actions started today will create angst among students and employees," George's message read. "That is to be expected, and it is something we have struggled with for weeks.

"We have tremendous people and outstanding programs. Seeing positions eliminated and programs reduced is difficult. But the reality is these actions must be taken to create a budget that can be sustained year after year. And the proposal approved by our budget and planning committee gives us that road map."

In discussions with the committee after the plan was unveiled earlier this month, George emphasized that that no degree programs would be eliminated under the proposal and no cuts would be made to the budget for undergraduate scholarships.

The announcement comes one day after Gov. Jay Nixon signed a higher education budget that includes more money for the University of Missouri System. But an anticipated decline in enrollment at UMSL will cut into revenue for the campus.

Updated 11:45 a.m. April 11, with committee approval: Plans to eliminate 85 positions and make other cuts to help erase a $15 million budget gap at the University of Missouri-St. Louis won approval Monday from the campus budget and planning committee.

The group, made up of faculty, staff and students, had sought more information about the two-year plan after it was introduced by Chancellor Tom George at a meeting last week. More details were provided, but George said he did not want public discussion to become too specific until anyone who would be losing a job could be notified personally.

George plans to make the final decision on the cuts by the end of this month. During the 90-minute committee meeting, he acknowledged the stress that the process has put on the campus, calling it a time of “terrible angst.”

“It’s not fun,” he added, “no matter where you are in this process.”

Officials emphasized that the number of positions that will be eliminated through layoffs, retirements or jobs that go unfilled might still change. Savings from compensation, plus elimination of activities throughout the campus, are expected to make up $12 million of the budget gap. The rest would come from $3 million in anticipated revenue.

But even that is uncertain, George said, particularly $1 million he projected in increased revenue from higher tuition and fees for the coming school year. The university system’s board of curators has yet to vote on what those final numbers will be as the legislature continues its debate on how much it will support the school.

George acknowledged that the construction on campus might make it seem as if UMSL is in better financial shape than it actually is. The dollars for building projects are separate from those for operations, he said, and financing for the construction was earmarked for that purpose and raised either privately, as is the case for a new business school, or from fees approved by students, as was the case for a new recreation center.

The campus anticipates a 3 percent drop in enrollment, and if that is greater than projected, George said even more cuts could have to be made. But, he added, the plan presented to the committed was designed to be a worst case scenario, and he doesn’t think it will have to adjusted downward.

George acknowledged the toll that the financial problems have taken on staff members who are worried about their jobs. But, he said, getting UMSL’s budget back on track should lead to stronger times ahead.

“If we can start putting dollars back into the institution, strategically,” he said, “hopefully we can start turning around the morale.”

The University of Missouri-St. Louis wants to close most of a $15 million budget gap by eliminating 85 positions, but Chancellor Tom George said Wednesday that the decisions would be made in a way that would minimize the impact on students in the classroom.

Figures presented to the campus budget and planning committee said 62 percent of the job cuts would come through layoffs, with 9 percent from retirements and the rest from not filling positions that are currently open. (See the graph at the end of the article.) The campus has about 1,300 positions, so the cuts would amount to 6 percent of the total positions or 4 percent of positions now filled.

The elimination of positions over the next two years would make up a large part of the $12 million in cuts the campus needs to balance its budget, George said. He plans to make up the rest with $3.4 million in increased revenue from a variety of fees, policy changes and higher tuition.

He emphasized that more than two-thirds of the job cuts would be coming from staff and the rest from faculty. He also noted that rather than make the budget cuts across the board, the money proposed to be eliminated from the various schools at UMSL generally amounted to less than those schools’ share of the overall budget. 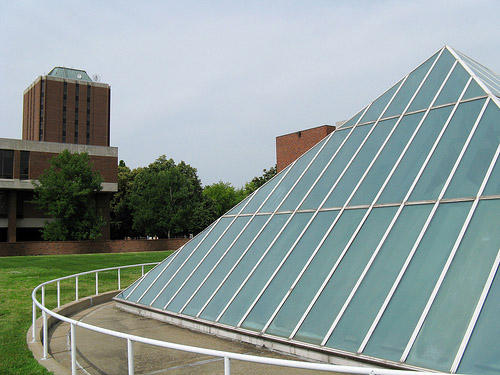 No degree programs would be eliminated under the proposal and no cuts would be made to the budget for undergraduate scholarships.

As for the general principles behind the decisions, George said he wanted to make sure UMSL could graduate students who are “career ready, culturally competent, physically and emotionally healthy, globally aware and locally engaged.”

He said he wanted to make sure that any effects on classroom instruction are limited, with a primary focus on recruitment and retention of students and a secondary emphasis on research, scholarly activities and fund raising.

Asked what effect the changes would have on current and prospective students, he said in an interview after the hour-long presentation and discussion:

“I don't think they're going to notice it. We're holding all of our classes, not like some other universities I've been hearing about, particularly Illinois, which is eliminating courses and classes. We're not doing that. So in terms of the students, they're going to still get the same services they were getting before.”

The committee has an advisory role in the budget process, but the final decisions are up to George and his staff. Committee members said they wanted more time to study the numbers and talk about them with departments on campus so they want another meeting to discuss the proposals further.

George said he wants the cuts to be finalized by May 1, so individuals who will be affected can be notified. No individual names or departments were included in the proposal released Wednesday and posted on the university’s website.

In addition to presenting details of the proposed cuts, George addressed general budget conditions for the University of Missouri system to the standing-room-only crowd.

He said the Missouri House had cut money from the system’s budget, though a Senate committee has restored most of those cuts. “We’re going in the right direction,” George said.

He also noted that commissions to review the university’s operations have been proposed. 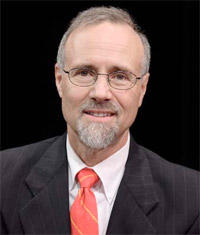 Gov. Jay Nixon had proposed that the state’s public colleges and universities keep tuition flat for the coming school year if the legislature agrees to increase support for performance funding by 6 percent. The board of curators for the four-campus UM system typically sets tuition and fees at its February meeting, but it has not done so yet for this fall because of uncertainty in Jefferson City.

UMSL is also anticipating a 3 percent drop in enrollment.

During discussion of the proposals laid out by George, members of the committee, which is made up of faculty, staff and students, said the situation the University of Missouri finds itself in is hardly unique.

“We need to be careful of assigning blame in this process,” said Matthew Keefer, a professor of educational psychology. “It’s happening all over the country.”

Much of the discussion by members of the committee concerned a lack of specificity about precisely where the cuts would be coming. George responded that because individuals would be affected, such personnel concerns could not be discussed in open session before the people involved are notified.

At one point, the committee considered going into closed session to get more detail. But that motion was defeated. Instead, they voted to reconvene soon after the general outline of the cuts has had time to be discussed on campus.

Not everyone was happy with that outcome, at least in terms of the lack of detail involved.

Cameron Roark, who heads the UMSL student government, said he wanted to see individual line items before he can decide whether to approve the plan presented by George.

He doesn’t need to know names, Roark added, but he wants to know whether elimination of certain positions will hurt those who attend UMSL.

“I’m not going to vote for something without knowing the direct impact it’s going to have on students,” Roark said.

Nick Palisch, who works in the school of optometry and heads the campus staff association, voiced a similar concern.

“Over 50 percent of this reduction is coming from the staff side of it,” he said, “so I want to make sure that they have the opportunity to see the proposal that is now online and provide feedback, so that I am able to bring those questions to the committee at our next meeting.

“We don’t want to violate personnel issues, but I also think that as part of the transparency process, we do need to see a better breakdown of what divisions, what units are having the biggest cuts, in terms of faculty and staff numbers. Do we need names? No. But I think a little bit more in details numbers would definitely be beneficial to the committee.”

The University of Missouri’s Board of Curators holds the license for St. Louis Public Radio.

The University of Missouri-St. Louis is planning layoffs this year in response to a $15 million budget deficit.