How divisive was the debate over Medicaid expansion in Missouri this year? 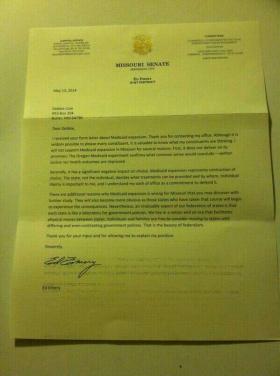 “We all live different lives, and some people out there may be working two or three jobs and have no insurance, and they need it to survive,” she says.

About a month after signing the petition, Cole got a letter from her state senator, Republican Ed Emery of Lamar.

The letter explained that Emery was concerned expansion would limit individual choice in healthcare. It also mentioned Medicaid expansion in Oregon, where one study showed the newly-insured failed to achieve significantly improved health outcomes on four measures compared to the uninsured.

Emery encouraged Cole to study expansion further and, before signing off, offered one more thought.

“We live in a nation and an era that facilitates physical moves between states. Individuals and families are free to consider moving to states with differing and even contrasting government policies,” he wrote.

Cole was not pleased.

“Sincerely, I was surprised, the way it was worded,” she says. “It sounded like I was ignorant, and I could move out of the state of Missouri.”

“I don’t think there was anything in there suggesting anybody should move,” Emery said in a recent phone interview with KCUR.

He says he received a package of form letters asking for expansion and he responded to each one.

For details on the last-minute Medicaid expansion compromise that failed to overcome House resistance, see the accompanying story on out website.

I received your form letter about Medicaid expansion. Thank you for contacting my office. Although it is seldom possible to please every constituent, it is valuable to know what my constituents are thinking. I will not support Medicaid expansion in Missouri for several reasons. First, it does not deliver on its promises: The Oregon Medicaid experiment confirms what common sense would conclude – neither access nor health outcomes are improved.

Secondly, it has a significant negative impact on choice. Medicaid expansion represents contraction of choice. The state, not the individual, decides what treatments can be provided and by whom. Individual liberty is important to me, and I understand my oath of office as a commitment to defend it.

There are additional reasons why Medicaid expansion is wrong for Missouri that you may discover with further study. They will also become more obvious as those states who have taken that course will begin to experience the consequences. Nevertheless, an invaluable aspect of our federation of states is that each state is like a laboratory for government policies. We live in a nation and an era that facilitates physical moves between states. Individuals and families are free to consider moving to states with differing and even contrasting government policies. That is the beauty of federalism.

Thank you for your input and for allowing me to explain my position.