The weight of trauma: Racial profiling on black citizens has lasting effects | KBIA

The weight of trauma: Racial profiling on black citizens has lasting effects

When Washington University student Teddy Washington and nine other black incoming freshmen were stopped by Clayton police officers in early July, the group followed the officers’ orders to prove they were not the perpetrators of a recent “dine and dash” at the nearby IHOP.

Several of the students presented their receipts to the officers before they walked back to the restaurant around midnight on July 7, with police vehicles alongside them. The manager of the IHOP confirmed to the officers they were not the suspects and the students were free to leave.

The Clayton City Manager Craig Owens issued a statement apologizing for what happened, but the effect the incident has on the students involved has yet to be seen.

“I think on every day there’s a black boy out there that this happened to that doesn’t know, one, this was wrong, two, that he can say something about it and that three, something can come from him saying something about it,” Washington said in an interview with Fox 2 News.

Listen
Listening...
/
The effects of racial profiling can have unforeseen consequences, including trauma.

A study from the Journal of Mental Health Counselling found that 81 percent of the African-Americans who reported racial discrimination were more likely to experience symptoms of PTSD.

The 10 Wash U students are just the latest to experience racial profiling in metro St. Louis. The Nordstrom Rack a few blocks away from the July incident was the center of controversy when a 19-year-old Mekhai Lee and two friends were falsely accused of stealing in May.

“It’s been on my mind like everyday,” Lee told St. Louis Public Radio’s Ashley Lisenby. “I don’t try to think about it, like it’s just in my mind. Like right now. ... I’ll wake up and something about Nordstrom Rack. It’s just in my brain.” 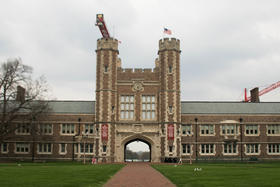 In the apology statement issued after meeting with the Wash U students, Owens said:

“We left (the meeting) with a much better understanding of how the students were feeling the night of July 7 and what it is like to be a young African-American who is confronted by the police.”

Nordstrom Rack flew its top executive to St. Louis to apologize to Lee and his friends in person. But apologies may be just the beginning for people subjected to profiling.

Parikh is not a stranger to this issue. Her husband, Jason Wilson, was accused of soliciting twice while he was campaigning for a Clayton school board seat. Residents called the police when they saw Wilson knocking on doors.

“When my husband was stopped, that didn’t just traumatize him or my family, It has a ripple effect,” Parikh said. “It makes other black families feel un-welcomed and feel like they are always going to be targets.”

Parikh has been in contact with Teddy Washington's family since mid July. She said interactions like these can cause lasting harm for the falsely accused.

“Now you have these 10 young black people. Some of them, this is their first encounter with the police in this way, and now they’re walking with it,” Parikh said.

Leon Sharpe, a human and organizational development specialist, agreed that trauma can have a powerful impact, especially when linked to racial profiling. He warned that the effects can be passed down through families.

“There’s also the generational trauma that gets handed down from one generation to another in communities of color around experiencing racism,” Sharpe said. “There needs to be continued work to address that.”

Clayton city officials announced several changes to their police department after the incident, including introducing body cameras for police officers and focusing on racial sensitivity training.

Sharpe said these changes are a step in the right direction.

“The kind of training that’s being done with police forces in many places is fine, but let's also look at how we are training and screening people who come into our police departments,” Sharpe said.

Washington told Fox 2 News that he wants to see this incident create larger change and wants to see the new practices reflected in everyday policing tactics.

“To say that I stole something, that’s really frustrating in the moment,” Washington said. “Moving forward. That was my kind of change in mindset. If I want to make a difference as far as how these situations are handled, me being emotional in the interactions I’m having, it doesn’t have a positive outlook.”

The investigation of the July 7 incident by the Clayton Police Department is ongoing.

Related |Mapping discrimination: A ‘shopping and dining while black’ tracker