Dr. Mehmet Oz, the celebrity physician and talk show host, launched his campaign for the U.S. Senate seat in Pennsylvania. Look carefully and his campaign materials might look oddly reminiscent to something you’ve seen before. Also, court documents bring statements from CNN’s Chris Cuomo into question, could the owners of the St. Louis Post-Dispatch find themselves in a hostile takeover and a Missouri man is released from prison after 43 years, thanks in part to the work of some Kansas City journalists. From Missouri School of Journalism professors Amy Simons, Earnest Perry and Ron Kelley: Views of the News. 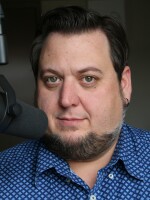 Aaron Hay
Aaron worked as a full-time on-air host at KBIA from 2017 to 2022. He continues as the Managing Producer on High Turnout Wide Margins.
See stories by Aaron Hay
Related Content